It is widely tipped[1] that US president-elect Joe Biden will nominate Janet Yellen as Treasury Secretary – one of the most important posts in any administration.

She will make for a terrific Treasury Secretary, bringing with her a wealth of experience and a lot of IQ points. Her appointment also signals what kind of president Biden is likely to be.

Yellen (born August 13, 1946) comes with impeccable credentials. She received her PhD in economics from Yale under Nobel-prize-winning economist James Tobin[2]. She was on the faculty at Harvard and for a long time at the University of California, Berkeley. She was chair of the Council of Economic Advisers for President Bill Clinton and went on to be president of the San Francisco Federal Reserve Bank.

President Barack Obama nominated her in 2010 to be vice-chair of the US Federal Reserve. In 2013 she succeeded Ben Bernanke to become the Fed’s 15th chair.

With apologies to Gilbert and Sullivan, she is the very model of a modern policy maker.

A centrist and experienced administrator

Yellen is in many ways a traditional centre-left economist. Her academic work focused mainly on imperfections in labour markets and how unemployment can arise.

One of her best-known papers[3] concerns how workers will put in less effort if they think they are being paid below what they consider to be a “fair” wage.

As chair of the Federal Reserve, given the tough position the US economy was in, Yellen used monetary policy in a conventional and aggressive way – much like her more conservative successor Jerome Powell has done.

But she also championed tougher financial regulation and emphasised that economic inequality was not merely an intrinsic concern but could be a drag on economic growth. 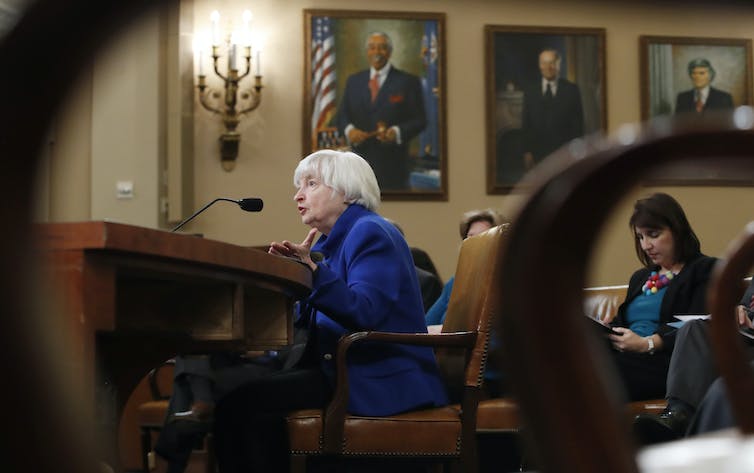 Though Yellen is in every way an excellent choice to head the US Department of the Treasury, Biden had other options.

He was under pressure to nominate someone much further to the left. Senator Elizabeth Warren, one of Biden’s rivals for the 2020 Democratic Party presidential primaries, reportedly wanted the job herself[4] – although to her credit she has praised Yellen as “an outstanding choice[5]” in recent days.

Yellen may believe in tougher financial regulation, but Warren would have been more than that; she has called the business of Wall Street “legalised looting[6]”, indicated her desire to destroy the entire private equity industry, and to impose a wealth tax of 6% a year[7] – enough to destroy capital accumulation, if not capitalism itself.

All of this signals that Biden, in eschewing the more radical Warren, is (a) not crazy, and (b) planning to run a centrist administration.

Read more: Vital Signs: talk of a US wealth tax is about symbolism as much as it is about economics[8]

The importance of the Treasury Secretary

It is hard for Australians to understand just how important the role of Treasury Secretary is in the US government. Yes, the role of Australia’s federal treasurer is regarded as second only to the Prime Minister, but that is in the context of cabinet government with an expenditure review committee.

By contrast, the US Treasury Secretary (with the support of the US president) wields almost unfettered economic authority.

That might be a blessing and a curse for Yellen, for she will take office with the US in the worst economic shape since the Great Depression.

From day one the whole Biden administration, Yellen included, will face huge challenges.

First, it must get the COVID-19 pandemic – now running rampant – under control. As any amount of international evidence has shown, one can’t have a functioning economy during a pandemic.

Read more: Data from 45 countries show containing COVID vs saving the economy is a false dichotomy[9]

Pandemic control itself will not be Yellen’s job. But what will be immediately important, and within her purview, is getting Congress to pass a stimulus package to boost the US economy while the virus is brought under control through various measures – perhaps even including the rollout of a vaccine.

That will be no easy task. Republicans in “red” states that have set aside so-called “rainy-day funds” feel loathe to fund what they basically see as a bailout to Democratic “blue” states who haven’t done the same. Senator Mitt Romney made exactly this point when talking to CNN podcast host[10] and former Obama advisor David Axelrod last week.

Beyond the immediate coronavirus response, Yellen will also face big challenges – perhaps the most vexing ones of all.

Economic problems beyond the pandemic

Prior to COVID-19, the US economy was in a low-growth, low-inflation funk. Something former treasury secretary Larry Summers has famously referred to as “secular stagnation[11]”.

This is where Janet Yellen, labour economist, may be just the person to be in charge of the treasury.

What economists and policy makers alike still don’t understand is why the speed limit of the US (and other advanced) economies seems to have dropped. Why is it unemployment needs to be close to 3% to get wage growth moving in the US? Why is inflation persistently low even in the face of very loose monetary policy?

This is also where Janet Yellen, former Fed chair, may also be the perfect person to be in charge. Thinking hard about how very low interest rates and fiscal policy interact in a practical way is a deeply important issue.

Plenty of smart people are working on that problem, but there is something unique about a former Fed chair and current Treasury Secretary marshalling an effort to provide a better understanding of this interaction.

When Biden officially announces (and the Senate confirms) Yellen’s appointment, we can look forward to one of the great economic policy makers of our time helping to deal with some of the most pressing challenges of our time.