From the 1980s right through to the global financial crisis, the standard response in Australia and elsewhere to too weak or too strong an economy has been monetary policy[1] — the manipulation of interest rates by a central bank, in our case the Reserve Bank.

Rates can be moved quickly, and central banks are seen to be independent and to behave responsibly, while governments are seen as making decisions for political rather than economic reasons.

But since the global financial crisis (in much of the world) and since COVID (in Australia) managing the economy has come to be seen once again as the role of the government through spending and tax decisions — so-called fiscal policy[2].

One reason is interest rates have fallen so low there’s been little left to cut.

Rate cuts have been used up

And there’s little that whatever cuts it could make could do to boost the economy. Their immediate impact would be to push up the prices of houses and other assets and worsen inequality.

So the government has turned to fiscal policy. Since the onset of the pandemic the Commonwealth has provided A$257 billion in direct economic support; about 13% of GDP.

By comparison, in response to the global financial crisis it spent $72 billion; about 6% of GDP.

It will help, but it will do little about the underlying reason why rate cuts have become ineffective, which is an excess of savings over opportunities to invest them.

We’re in a savings glut

As far back as the mid-2000s the then chairman of the US Federal Reserve, Ben Bernanke, was talking about a savings glut: too many savings chasing too few opportunities to invest. 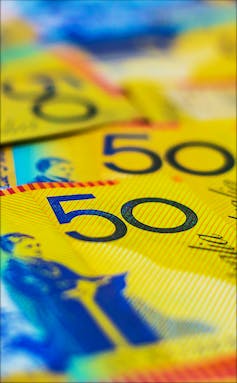 Too many savings chasing too few opportunities. Ashwin/Shutterstock

For a while the US and other economies remained strong as the downward pressure of excess savings on demand was held at bay by households borrowing ever increasing amounts in order to spend.

There are two suggested explanations. One involves supply[5]. It might be that the ability of the economy to supply more of what we want is slowing.

The other involves demand[6]. It might be that we not demanding enough of the things the economy can produce.

Potential supply might be slowing because modern-day technological progress, principally in the form of information and communications technology, is having less of an impact[7] than previous new technologies such as electricity, the internal combustion engine or the automated production line.

Read more: Why zero interest rates are here to stay[8]

Australia’s treasury has also suggested the Australian economy might be less dynamic[9], with lower levels of firm entry and job switching, slower adoption of frontier technologies and processes, and less labour reallocation of resources from low to high productivity firms.

It is these supply-side constraints that have captured the attention of the Australian authorities.

On the other hand, in the US, former Treasury Secretary Lawrence Summers has pointed out that if supply-side constraints were the principal problem, inflation would have been expected to accelerate[10] as capacity to supply fell short of demand, whereas in fact it has decelerated.

What’s more likely is there’s insufficient demand for the goods and services the economy is able to supply.

This would explain why firms are reluctant to invest (and invest in new technology) to make more goods and services, a reluctance that might itself be slowing technological progress and the rate of increase in potential supply so that it better matches the slow increase in demand. 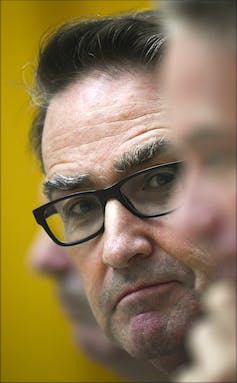 It would also explain why interest rates have been falling. Businesses don’t need funds to invest on the scale they once would have, however widely available those funds are.

According to Australia’s treasury secretary[11] Steven Kennedy, this savings glut is the reason the neutral interest rate (the real cash rate that is neither expansionary or contractionary[12]) has been falling over the last 40 years.

He attributes these lower rates to “some combination of population ageing, the productivity slowdown and lower preferences for risk among investors”.

Given the international literature, it is surprising he hasn’t also identified changes in the distribution of incomes.

Our incomes are becoming more skewed

This means changes in the distribution of incomes can drive changes in demand.

Read more: What the Bureau of Statistics didn't highlight: our continuing upward redistribution of wealth[15]

Although the available data doesn’t show any further increase in income inequality during the 2010s, it shows the previous increases haven’t been reversed.

In addition, the unequal distribution of wealth has worsened dramatically[16].

So far, the government response to the COVID crisis has been good in this respect.

JobKeeper[17] and the Coronavirus supplement[18] for job seekers have both been of most benefit to lower income Australians.

Looking to the future, a sustained recovery in demand is unlikely to come from extra spending on infrastructure[19]. These projects typically employ few people and have either no business cases or business cases of dubious value.

Nor will it come from general fiscal support, including income tax cuts[20] for high earners with high propensities to save.

Long-term, it will have to involve boosting the earning potential of low earners.

Education and services are the places to start

This will mean, as a first priority, boosting spending on education and training in order to improve skills and earning power and better suit skills to needs.

The second priority has to be improving the quality of and access to government services.

Services such as aged care have suffered from under-funding, denying employment opportunities to low earners and denying others support.

Read more: If we have the guts to give older people a fair go, this is how we fix aged care in Australia[21]

In addition, cutting the cost of childcare and a revamping its means tests would encourage many women to increase their hours of work and thus their family income, as well as creating more jobs for carers.

One of the great benefits of fiscal policy is that it can be targeted in this way, refashioned to improve income distribution and consumer demand.

It is another reason for preferring it over monetary policy for some time to come.