Last week, the fifth most senior minister in the Morrison Government, Agriculture Minister and Deputy National Party Leader David Littleproud[1], threatened the ANZ bank with “every lever at the federal government’s disposal - including the availability of deposit guarantees”.

His concern was an ANZ statement about climate change.

The bank had said that it supported the transition to a net zero emissions economy by 2050, and that as a consequence it would no longer provide banking services for new business customers with “material thermal coal exposures[2]”.

For me, it evoked 18-year old memories of when I was the ANZ bank’s chief economist in the early 2000s.

I had delivered a speech to a conference of accountants in which I’d been critical of the Howard government for its pretence that the goods and services tax wasn’t a federal tax and therefore didn’t need to be included in budget estimates of total tax collections.

After seeing media reports of that speech, the then treasurer Peter Costello phoned the then chief executive of the ANZ John McFarlane threatening (as McFarlane subsequently relayed his words to me) regulatory action which ANZ would not like[3] if I said that sort of thing again.

Costello also had his then press secretary fax (it was 2002) a press report of my remarks to the then Chairman of ANZ, Charles Goode, with the offending passage circled.

I was, frankly, astonished, that the third most important minister in the government at that time, someone who by his own account was single-handedly returning the budget to surplus, promoting wide-ranging tax reform and reversing a long-term decline in Australia’s birth rate, would have the time to ring the head of one of Australia’s big four banks to complain about something its chief economist had said on an arcane topic to an obscure conference.

Read more: The art of the leak: how the budget is strategically doled out for maximum effect[4]

And I was appalled that any Australian treasurer would be willing to use the regulatory powers granted to him to help ensure the stability of the financial system to (at the very least) silence someone who’d had the temerity to question the accounting treatment of a tax measure.

To their very great credit, neither the chief executive John McFarlane nor the chairman Charles Goode sought to take any disciplinary actions against me. 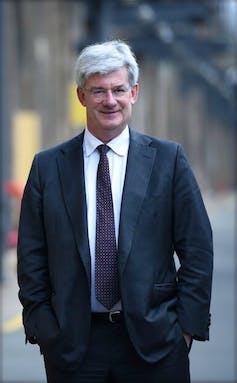 Goode sought an assurance that there was nothing personal in what I’d said (there wasn’t) and reminded me that I should not create the impression that ANZ was aligned with any side of politics.

McFarlane indicated that it was important that the ANZ “got on well” with the man who was (in his words) “likely to be the next prime minister”, and asked me to ring Costello up and “smooth things over”, and to avoid commenting on that particular topic again.

In accordance with these instructions I rang the treasurer’s office, but he refused to take the call (so I was told).

I scrupulously avoided such comments from then on.

When I declined an invitation from a journalist to comment on a subsequent government decision to fiddle with the timing of the Reserve Bank dividend to improve the 2004-05 budget position at the expense of the 2003-04 one, I received a note from McFarlane thanking me “for taking the greater good of ANZ and an easier life for me into account”. 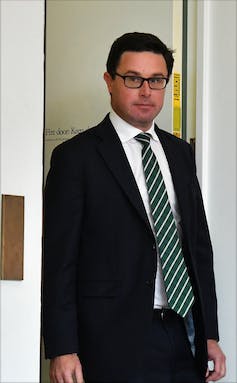 Costello was trying to silence what could never have been more than a mere irritant.

Littleproud is seeking to prevent one of Australia’s leading banks from making a conscious, ethically-based decision to bring its lending practices into line with the goal of reducing Australia’s carbon emissions.

He is threatening to withdraw from its deposit customers the protection provided by Australia’s deposit insurance scheme – presumably in the hope that those customers would take their deposits to another financial institution.

It’s an odd approach for a member of a government that says it believes in a “vibrant, productive, free enterprise system[5]”.

Such a free enterprise system would, presumably, be one in which privately-owned enterprises were free to decide who they did business with.

Instead Littleproud seems to believe (as perhaps does the government of which he is a part, since no-one more senior has sought to “clarify” his remarks), that the government should decide who gets loan funds, and the circumstances under which they get them.

Free enterprise is only as free as the government allows it to be.