Let’s talk about “city deals”. The Australian government is.

Its department of infrastructure[1] website describes them as “a genuine partnership between the three levels of government and the community to work towards a shared vision for productive and liveable cities”.

The idea comes from the UK. There they award extra funding and special decision-making powers to local authorities who can demonstrate they will use them to boost economic growth[2].

The Western Sydney Aerotropolis and Western Sydney International (Nancy-Bird Walton) Airport will attract infrastructure, investment and skilled jobs, and the benefits will flow into health and education, retail, hospitality and industrial activities that will power the region.

It’s one of 22 such announcements about the Western Sydney deal in the past two years.

The deal no vice-chancellor can refuse

Whatever their merits as a tool for planning, city deals are useful for making announcements about jobs, and also for spending money in electorates in which the government takes a special interest.

In western Sydney, four universities – one of them the University of Newcastle, which is hundreds of kilometres away – are being funded to develop a “Aerotropolis Multiversity[5]”.

City deal funding is funding no university can resist, in part because it is now about the only way they can get money from the federal government for buildings. 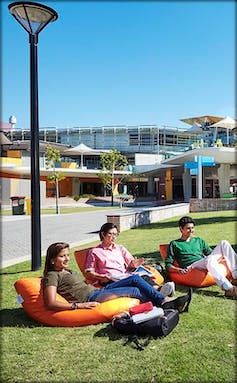 It comes at an eye-watering cost of A$695 million. The university has to find $300 million. The federal government will provide $245 million.

The Western Australian government might come out ahead[8]. It will contribute a $50 million CBD site it has had problems selling and take possession of the university’s Mt Lawley campus, just 5 kilometres north of the CDB, which it can use to expand the adjacent high school and sell what’s left for medium-density housing.

It has promised to use the proceeds to “underwrite[9]” $100 million of the university’s costs, although whether this will be a loan or a grant is not clear.

Instead of being in a spacious campus that needs some renovation, 10,000 students will be in a vertical city building of the kind the University of Technology Sydney no longer uses for teaching, because of the difficulty of moving students between floors[10].

City buildings from Perth to Launceston

The first city deal was in Launceston[11]. This involves moving part of the University of Tasmania’s campus from the suburb of Newnham to Inveresk, a site 5 km closer to the centre of Launceston. 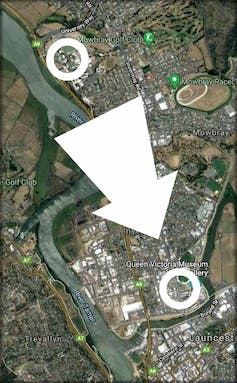 The five-kilometre move planned in Launceston.

It has many similarities to the Perth city deal, not the least being the university will have to do most of the heavy lifting, including bearing the risk of cost overruns.

There are rosy projections that the new site will attract more students, including internationals, but they run counter to the experience of the university’s School of Architecture and Design, which has experienced a catastrophic decline in enrolments despite being at Inveresk for many years.

In another part of the “Northern Transformation” project, the University of Tasmania is moving its Burnie operation from a 25-year-old campus at Mooreville Road 2 km to a new $85 million campus at West Park.

All up, the Northern Transformation project will cost the University of Tasmania more than $300 million, which at the moment it does not have.

Darwin is getting yet another CBD campus

A similar story is playing out in Darwin, where a new CBD campus for Charles Darwin University is being delivered 14 km from its main campus at Casuarina. 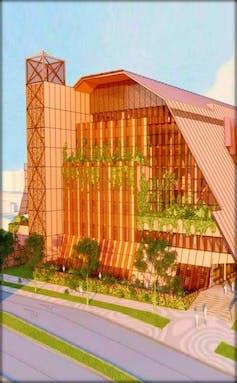 A design for Darwin's second CBD campus.[12] There the aim is to create an iconic building[13] “that links city-based elements of CDU to each other and to various parts of the city, and offers the potential to reimagine the CBD with the university at its heart”. What’s odd is that Charles Darwin University already has a CBD campus, organised in a deal with a local developer. It hasn’t met its student growth targets, mainly because it lacks the things needed to attract students, including a decent library, cheap places to eat and affordable accommodation. The new CBD campus will be better than that, but the vastly more efficient option of simply redeveloping the main Casuarina campus and dumping the failed existing city campus wasn’t on the table. While the Darwin CBD campus will generate jobs during construction, and the territory government will be overjoyed to be getting some cranes back on the Darwin skyline, the benefit for the university is harder to identify. Funding ought to be needs-based I am not against funding university redevelopments, far from it. Many of Australia’s university buildings are old and in need of updating. The University of Tasmania, Charles Darwin University, Edith Cowan University and Western Sydney University, among others, enrol less of the international students that have allowed other universities to fund the maintenance and redevelopment of their buildings. Charles Darwin University and the University of Tasmania are the only universities in their states. But the City Deal process is forcing universities to move into CBDs to get funds, whether it makes sense or not. Read more: Why is the Australian government letting universities suffer?[14] Evidence suggests that CBD campuses are a fad, not a solution. Campuses in tall buildings cost about twice as much per delivered square metre as low to medium rise sites and CBD buildings lack the long-term development flexibility of a campus. Most importantly, undergraduate students don’t much like them. They lack parking spaces, they often lack child-care facilities, students are forced to cram into lifts to move between classes, and they are not near cheap accommodation. Students prefer space to height The campuses popular with students around the world tend to be about 5-10 km from a CBD and have 5,000 to 20,000 students, with a high proportion living on campus. Bond, the University of New England and Griffith University are good Australian examples. Leiden, Bath, Lancaster and Stanford are overseas examples. It is sometimes said CBDs attract students, particularly international students, but most of Australia’s biggest and most successful universities are located in the city fringe or the suburbs. Read more: 3 ways the coronavirus outbreak will affect international students and how unis can help[15] Few successful research universities are located in the centre of cities. Of the top 100 research universities in the world, as measured by the Academic Ranking of World Universities, only a handful are in CBDs, and usually only because the CBD engulfed them. The best research comes out of large campuses, rather than single buildings. The best-value university projects ought to be the ones that get funded rather than those that have the side benefit of allowing politicians to (repeatedly) claim they are “revitalising[16]” cities. But that would require paying attention to universities for their own sake, something the government appears reluctant to do[17].