My old OECD boss Secretary General (SG) Angel Gurria’s third term is coming to an end and the race is on to replace him.

Australia’s departing finance minister Mathias Cormann[1] will face off against likely candidates from France, Japan, Mexico, Poland and South Korea[2] and others yet to declare their hands.

Nominations are made by member countries and close on November 1[3].

The successful candidate will be announced by March 1. The next SG will begin the five-year term on June 1, 2021.

The person chosen will be remembered either as the SG who saw the OECD lose relevance in the face of pressure from large countries to cut its budget and marginalise it or, alternatively, as the person who kept alive the importance of the collective interest in holding governments to account, in a lobby-free zone.

The OECD has come a long way

The OECD began as the Organisation of European Economic Cooperation in the ruins of the second world war. Its brief was cooperation in the post-war reconstruction of Europe. It was about getting old foes to bury the hatchet and focus on common needs as US loans and technology were passed to Europe.

Its flagship activities were economic forecasting and country surveys.

As the formation of the European Economic Community in the late 1950s rendered some of its original role redundant, the United States and Canada joined, and in 1960 it was rechristened[4] the OECD.

Japan joined later in 1964 and Australia much later in 1970. Today it has 37 member countries, all of them upper or middle income democracies, including Mexico, Korea, Chile and Israel.

Brazil, India, China, Indonesia and South Africa are official partners (although not members), meaning the OECD is able to address challenges facing countries that account for 80% of world trade.

From tax to bribery, its work is important

At first it too focused on forecasting and country surveys, but then the International Monetary Fund moved into that role after its original raison d'être of exchange rate stability was taken away as the world moved to floating exchange rates in the wake of massive spending by the US to sustain the Vietnam War and the mid-1970s oil crisis.

Read more: The PISA world education test results are about to drop. Is Australia getting worse?[6]

It’s Programme for International Student Assessment[7] (PISA) is the gold standard for assessing the performance of students worldwide.

The way it works was well suited to these roles and could not be duplicated by other international organisations. Its agenda is driven by committees made up of representatives of member governments rather than its permanent staff.

In these committees, more than 300[8] including expert and working groups, representatives come together to discuss problems and how cooperation can help sort them out.

Read more: The OECD's scorecard for the Digital Economy. Australia OK, but could do better[9]

The expansion has been demand-driven, with member countries, companies and other institutions often providing voluntary financing to make them work (OECD budgets are always under pressure). Today roughly one third of the OECD is funded this way.

It requires a special type of leader.

What’s needed to run the Paris-based organisation is someone who is credible, experienced in international affairs, has presence and gravitas, is a linguist (English and French), a fund raiser, energetic, ready to spend months travelling, thick skinned and has vision and courage.

It needs a leader who’s unafraid

Above all, it has to be someone who believes in the idea of the OECD and wants it to make a difference.

The present SG, Mexico’s Angel Gurria has been perfect, pulling it out of a lull and raising its profile. 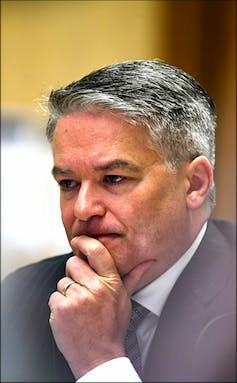 Unfortunately, after 15 years with Gurria at the helm, some governments are looking for a more of a consensus-seeker.

“Consensus” means moving to the lowest common denominator, and not rocking the boat by using the full power the SG has to publish under his or her authority whenever consensus cannot be reached, as is often the case.

How will the new SG be chosen? The OECD Council doesn’t have the seniority and independence to decide. The appointment will be approved back in the capitals after lobbying by politicians and trading of favours, just as these things are decided for all heads of international organisations.

The best hope for an inspiring choice will be the smaller countries.

We can be grateful there’s one vote per country and no veto held by major powers as is so often the case in other international organisations.

Adrian Blundell-Wignall is a former director of the OECD