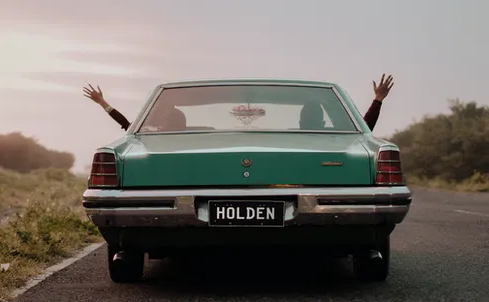 Much of the focus of Opposition Leader Anthony Albanese’s budget reply speech[1] was around Labor’s proposal to expand childcare subsidies – a policy with some flaws but which moves in the right direction.

Labor’s plan to modernise the electricity grid by setting up a “Rewiring the Nation Corporation” with A$20 billion in government support was also met with general approval.

What got less attention was the third pillar of Labor’s budget strategy – a big push toward more local manufacturing jobs.

Albanese wasn’t shy about what he meant[3]. He lamented the loss of Australia’s car-making industry:

Australians will never forget that it was this government that drove Holden, Ford and other car makers out of Australia, taking tens of thousands of jobs in auto manufacturing, servicing and the supply chain with them.

We will provide leadership to the states and work with industry to identify and optimise the opportunities to build trains here in Australia – for freight and for public transport.

The economics of pillars 1 and 2 make sense. Pillar 3 involves trying to turn back the clock on the irrepressible, tectonic forces of globalisation and automation to pretend we should make things here we shouldn’t.

Countries benefit from trade rather than seeking to produce everything they need locally. This is due to the idea of “comparative advantage”, originated by David Ricardo in his 1817 book On the Principles of Political Economy and Taxation[4].

Why? Because country A produces T-shirts much more efficiently than country B, and country B is only a little less efficient at producing wine. Overall, both economies get more efficient, raising living standards. 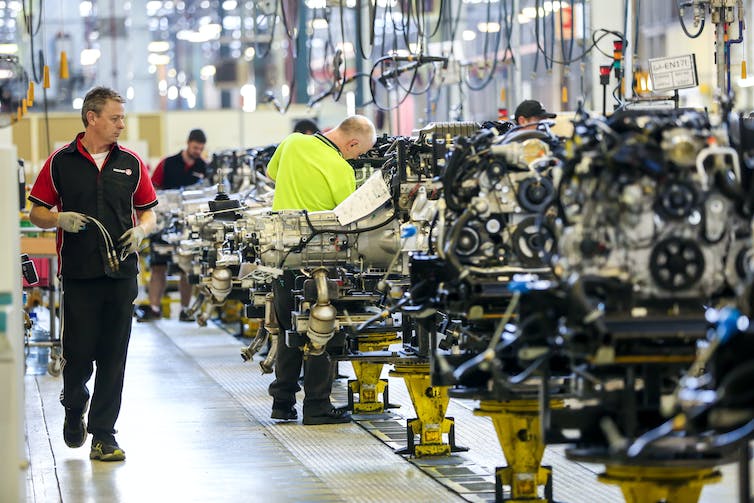 Holden’s factory in Elizabeth, Adelaide. Its closure in October 2017 marked the end of car making in Australia. Holden/AAP

Making cars and trains in Australia

Does Australia have any comparative advantage at producing cars or trains?

With cars the evidence speaks for itself. Local manufacturing only survived for decades because of huge government subsidies. Without them Australian-made cars couldn’t compete.

Only part of that was to do with labour costs – and we should be rightly proud of our comparatively high wages and good working conditions. Germany – home of BMW, Mercedes Benz and Volkswagen – also has high wages and conditions.

What about trains? Some trains are made in Australia – by Downer EDI[6] and Canadian multinational Bombardier[7]. That’s good for a few thousand jobs. But the market is domestic, with the customers being state governments who buy with an eye on local jobs.

There’s not a lot to suggest it can become an export industry, competing for example with Japan, which has been making bullet trains since the early 1960s[8]. Or France, whose train builders have sold hydrogen trains to Germany and high-speed freight trains to Italy.

With these competitors having such an edge, and the well-known phenomenon of “learning-by-doing”, are we really going to catch up? 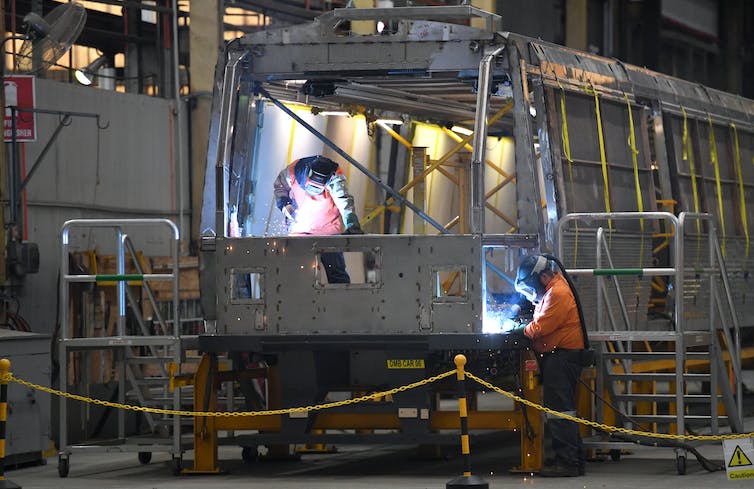 A train being built for the Queensland government at the Downer Rail factory in Maryborough, Queensland, in 2017. Dan Peled/AAP

There are many other sectors in which Australian producers are internationally competitive, such as agriculture, services and areas of high-tech manufacturing. Building on and expanding comparative advantage[9] in these areas makes a lot more sense.

The case for strategic manufacturing

That said, the COVID-19 pandemic has taught us how fragile certain parts of our economy are. The same logic of comparative advantage that has done so much to improve living standards has also made us vulnerable in some areas.

Having little or no manufacturing capacity in personal protective equipment or pharmaceuticals like insulin, EpiPens and antibiotics is potentially very dangerous. Importing more than 90% of our pharmaceuticals[10] puts us in a vulnerable position if a state actor that controls important parts of the global supply chain decides to cut supply. This is what economists call the “hold-up problem”.

Read more: Medical supply chains are fragile in the best of times and COVID-19 will test their strength[11]

So it makes sense for Australia to have more presence in strategic manufacturing like pharmaceuticals and personal protective equipment, even if producing these goods locally is not as efficient as buying them from overseas.

From just-in-time to just-in-case

The pandemic has taught us that we have, as a nation, moved a little too far towards the efficiencies of “just-in-time” supply chains. We need to move back somewhat, but certainly not completely, in the direction of “just-in-case” – to a little less efficiency but a little more insurance.

That should involve a push for strategic manufacturing. We should at all times be looking to build on and expand our comparative advantage.

But trying to go “Back to the Future” and build an Australian De Lorean makes no sense.