There has been little comfort for AMP’s female employees in the corporate heavyweight’s bid to put its sexual harassment scandal to bed.

Nor, for that matter, women in any workplace.

The resignations of AMP’s chairman David Murray and board member John Fraser this week were the culmination of events beginning with a revolt by female employees[1] in early July, after it was revealed the newly appointed chief executive of AMP’s investment management division had been disciplined for sexual harassment in 2017.

AMP’s blind spot may have been extreme – with the cultural and reputational costs eclipsed by the perceived value of Pahari to AMP Capital’s A$192 billion investment management business – but its reactive approach to sexual harassment is hardly unique. In fact, it’s a systemic feature of Australian corporate culture.

Even in resigning Murray made it clear he backed how the board dealt with the complaint (docking Pahari a quarter of his A$2 million bonus[2] in 2017).

“However,” Murray said, “it is clear to me that, although there is considerable support for our strategy, some shareholders did not consider Mr Pahari’s promotion to AMP Capital CEO to be appropriate.” 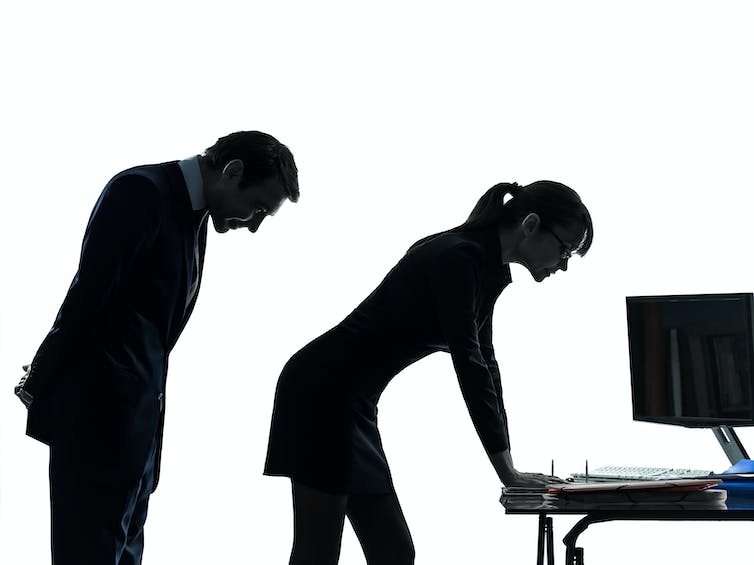 A reactive approach to sexual harassment is common in Australian management culture. Shutterstock

The two board resignations, along with Pahari’s demotion[3], were indeed forced by an ultimatum from AMP’s biggest investors[4]. By all appearances, the board’s approach in this case has been to treat sexual harassment as a risk to its share price, rather than a risk to the health and safety of its employees.

And that’s a problem bigger than AMP.

Read more: AMP doesn’t just have a women problem. It has an everyone problem[5]

Reactive management of sexual harassment is common, according to the Australian Human Rights Commission, whose National Inquiry into Sexual Harassment in Australian Workplaces[6] reported in March:

Current approaches to preventing and responding to sexual harassment in workplaces are inadequate. They typically focus on policies that prohibit sexual harassment and complaint mechanisms for workers to report it. They are reactive, legalistic and often contribute to ongoing (albeit unintended) harm to workers. These approaches, which have remained largely unchanged for decades, have failed to stop rising rates of workplace sexual harassment.

The inquiry was established in 2018, in light of the #metoo movement and the Commission’s own findings[7] that one in three workers had been sexually harassed in the previous five years, with fewer than 20% making a formal complaint.

Read more: 72% of Australians have been sexually harassed. The system we have to fix this problem is set up to fail[8]

Its report notes that throughout the inquiry “the commission heard of the need to shift from the current reactive, complaints-based approach, to one which requires positive actions from employers and a focus on prevention”. 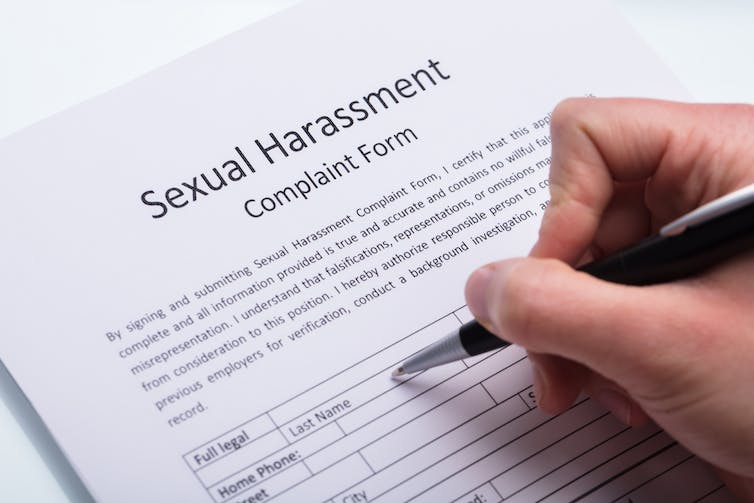 The Australian Human Rights Commission says three-quarters of those sexually harassed at work do not make a formal complaint. Shutterstock

How sexual harassment is managed is shaped by it being regulated through anti-discrimination legislation.

Anti-discrimination law puts an emphasis on individual rights. Its remedies require individuals taking action to assert or defend those rights. The problem is that in more than 80% of cases those sexually harassed don’t make a formal complaint.

Read more: Women don't speak up over workplace harassment because no one hears them if they do[10]

the current system for addressing workplace sexual harassment in Australia is complex and confusing for victims and employers to understand and navigate. It also places a heavy burden on individuals to make a complaint. It means most people who experience sexual harassment never report it. They fear the impact that complaining will have on their reputation, career prospects and relationships within their community or industry.

Making it a health and safety issue

A “positive” approach focused on prevention, as recommended by the Australian Human Rights Commission, requires shifting to management of sexual harassment as a work health and safety issue.

Workplace health and safety laws are premised on an employer’s “positive duty” to keep workers safe. They require employers to identify risks to the health of employees, and eliminate these risks so far as is reasonably practicable.

But with increasing awareness of mental health issues, and of psychosocial work hazards including sexual harassment, this is beginning to change.

Read more: Workplace sexual harassment is a public health issue and should be treated as such[12]

In March, WorkSafe Victoria adopted guidance material[13] to educate employers on their duties to prevent sexual harassment under the Occupational Health and Safety Act 2004.

This material (which followed a campaign by Victorian unions[14] and community organisations) is the first of its kind from a work health and safety regulator in Australia. It reminds employers:

Where there is a risk of work-related sexual harassment causing physical or mental injury employers have an obligation under the OHS Act to control that risk.

Unions and others are campaigning for New South Wales[15] to follow suit. The Australian Human Rights Commission has recommended law changes to the federal government to implement a “positive approach”.

AMP’s self-inflicted wounds demonstrate the need for an such an overhaul. A board treating sexual harassment as a matter of health and safety would have to eliminate or manage the risk of it.

Had AMP taken proactive steps to protect workers from sexual harassment, it could have avoided this situation.