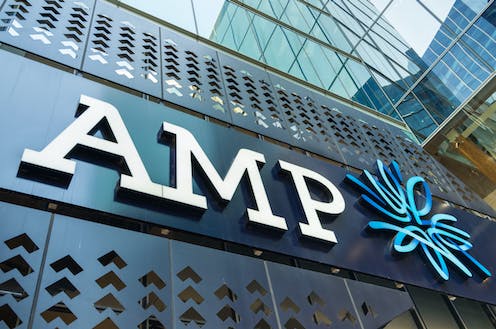 Heads have rolled at AMP, and rightly so.

Particularly the head of chairman David Murray, who this week resigned, somewhat unapologetically, over the sexual harassment scandal that has enveloped the embattled Australian financial services giant.

As chair, the buck stopped with Murray.

The board’s decision to promote executive Boe Pahari, an executive with a record of sexual harassment, to one of its most senior positions was bad enough.

Compounding the problem was the way the board defended its decision, downplaying the offence and dismissing staff concerns, until finally buckling under shareholder pressure.

Read more: AMP doesn’t just have a women problem. It has an everyone problem[1]

Appointed to replace Catherine Brenner in 2018 in the wake of the damning findings of the banking royal commission, the veteran banker was probably never the right man to salvage AMP’s tattered reputation.

Consider his statement announcing his departure[2].

In it he managed to avoid any apology or concede any mistake. He maintained the complaint against Pahari had been “dealt with appropriately” in 2017. He suggested putting Pahari in charge of the company’s investment management division had “considerable support” apart from “some shareholders”.

Under Murray’s leadership, AMP’s clear focus has been financial performance. His view of management responsibilities can be described as “traditional”. It emphasises the board’s prime responsibility is shareholder value. He has never been a fan of broader social and environmental responsibility agendas, or anything else he regards as a distraction.

He was one of the biggest critics, for example, of the Australian Stock Exchange’s 2018 proposal to include in its corporate governance principles[3] a reference to “a social licence to operate”. The proposal was ultimately dropped in early 2019.

The proposal would have added the following commentary to its principle of acting lawfully, ethically and responsibly:

A listed entity’s social licence to operate is one of its most valuable assets. That can be lost or seriously damaged if the entity or its officers or employees are perceived to have acted unlawfully, unethically or in a socially irresponsible manner.

Preserving an entity’s social licence to operate requires the board and management of a listed entity to have regard to the views and interests of a broader range of stakeholders than just its security holders, including employees, customers, suppliers, creditors, regulators, consumers, taxpayers and the local communities in which it operates.

Long-term and sustainable value creation is founded on the trust a listed entity has earned from these different stakeholders. Security holders understand this and expect boards and management to engage with these stakeholders and to be, and be seen to be, ‘good corporate citizens’.

Murray (and others) pushed back against the proposal hard. In his first major interview[4] after taking over as AMP chair he declared.:

We will not be guided by the ASX corporate governance principles where they either weaken accountability or distract the company to less important issues.

Read more: The ASX abandons push to require companies to have a social licence to operate. Was it only ever 'politically correct nonsense'?[5]

More attention to social licence, though, might have helped Murray and AMP avoid its grievous recent history, which includes charging fees for no service and billing dead customers.

AMP’s business model has privileged shareholder value above community and employee consideration. Yet this narrow view has also failed to serve investors – a message that has been delivered by several of AMP’s biggest institutional shareholders.

A culture in which profit takes precedence over non-financial risks, ethical standards and legal constraints heightens the propensity for flawed business models, governance oversights, conflicts of interest and bad behaviour.

That pretty much sums up where AMP is still mired.

Murray departs with his promise to restore AMP’s battered reputation unfulfilled. But it will take more than his exit to change the company.

His replacement, Debra Hazelton, has said she is committed to regaining the “trust and confidence of clients, shareholders and employees”.

This will require a massive culture shift to win back customers and employees that have been treated so shabbily.

Companies that disregard social licence do so at their peril.