In the negotiations for an Australia-European Union Free Trade Agreement[1] at present underway, the European Union is pushing for longer monopolies on medicines for its pharmaceutical companies.

If it gets them, Australians will wait longer for cheaper versions of those medicines.

It is important information, but we are only aware of it because (unlike Australia) the European Union publishes[2] its trade negotiating positions.

Ours have long been kept secret, even from us.

Next week the parliament’s Joint Standing Committee on Treaties will hold a hearing[3] into whether we should change the system to make sure we know more.

At the moment the committee only gets to see trade agreements after they have been signed, meaning (literally) that the Australian people don’t get to know what their government is a bout to sign until after it has signed it.

Afterwards, the parliamentary committee is effectively limited to saying yes to ratification (the final step after signing) or no. It can’t suggest changes to the text.

Nor can the parliament, which only gets to vote on the enabling legislation. Some parts of agreements, including some that constitute binding commitments, are not included[5] in that legislation. 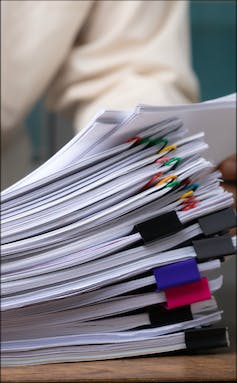 The committee’s recommendation follows similar recommendations[6] by previous inquiries, and a plea by the Productivity Commission[7] for independent modelling of likely outcomes before negotiations begin, and and an independent public assessment of agreements after they are concluded, but before they are signed.

The Commission says the current arrangements lack transparency and tend to oversell the likely benefits[8].

The so-called national interest analyses and regulatory impact statements prepared by negotiators are delivered after the agreements have been signed and so far have always recommended they be ratified[9].

The agreements deal with more than trade[10].

One reason is that Australia already has very low or zero tariffs. Negotiators from other countries need to obtain other concessions.

Read more: It's more than a free trade agreement. But what exactly have Australia and Indonesia signed?[11]

The Comprehensive and Progressive Trans-Pacific Partnership[12] ratified by Australia in 2018 has chapters dealing with the regulation of essential services such as medicines, education, aged care, childcare, energy, financial and digital services, as well as foreign investment, labour and environment regulations and government procurement and product standards.

The European Union[13], the United States[14] and Japan[15] use the negotiations to fight for longer monopolies on medicines. Investors use them to obtain the right to sue governments[16]; copyright owners use them to achieve longer copyright terms[17].

The committee could recommend that government table in parliament a document setting out its priorities and objectives at the start of each negotiation.

It could recommend an independent analysis of the costs and benefits of proposed agreements of the kind suggested by the Productivity Commission, both before signing, and also some years after signing to get an idea of whether they have lived up to their promise.

Read more: When even winning is losing. The surprising cost of defeating Philip Morris over plain packaging[20]

It could consider the health, environment and gender impacts, as well as the economic impacts.

And it could recommend that the parliament rather than the executive be given the role of agreeing to whole treaties, something legal experts say would permitted[21] by the Constitution.

These changes would give us a better idea of what’s being negotiated in our name.