The Australian government is planning to spend A$190 billion to support the economy in response to COVID-19, according to the latest Parliamentary Budget Office[1] estimate.

The total impact of COVID-19 on the government’s net debt, including both revenue impacts (down, because of less activity) and spending impacts (up because of spending to support the economy) amounts to between 11% and 18% of gross domestic product, or A$500 billion to A$620 billion. 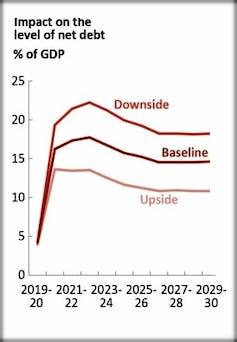 Parliamentary Budget Office[2] The estimates are based on the three possible scenarios developed by the Reserve Bank[3]: “downside”, “baseline” and “upside”. Each differ in their assumed timing of the relaxation of social distancing and other restrictions, and for how long uncertainty and diminished confidence weigh on households and business activity. With similar blow-outs around the world, a view gaining ascendancy, including amongst commentators such as Alan Kohler[4], is that government debt doesn’t matter – provided the government owes the money to its central bank (in Australia’s case, the Reserve Bank) or the bank is prepared to buy the debt from the party the government borrowed the money from. The view is an application of so-called modern monetary theory[5] and the argument goes like this: when the government runs a budget deficit, it borrows from the private sector (mainly financial institutions) by selling government bonds which are effectively IOUs offering to repay in a certain number of years and offering interest at a low bond rate[6] until then the Reserve Bank (along with other central banks) has been buying bonds from the private sector with money it creates[7], and says it is prepared to buy as many as are needed[8] to keep the bond yield low, so that if it looks as if the bond rate will rise, much of the debt will ultimately be owed to the bank when the bonds expire and it is time to repay the debt, the government can simply issue more bonds which the bank will ultimately buy if it has to in order to keep the bond rate low if down the track all of the extra money in the banking system causes inflation, the process would be thrown into reverse: the government can the deficit, repay the Reserve Bank and others when loans fall due and cut the supply of money, slowing down inflation. It sounds too good to be true, because it is. There are a number reasons why deficits and debt do matter, even if the debt is effectively owed to the central bank and even if it has been created in a recession, or in anticipation of one – as is the case for the COVID-19 response. Creating money carries risks We know that governments with high debt face interest rate premiums[9] from lenders. A European Union study[10] found that a 10 percentage point increase in the government debt to GDP ratio increased the sovereign bond rate by 0.47 percentage points. These higher risk premia flow on to private sector borrowers whose interest rates are set in relation to sovereign interest rates, so all households and businesses face higher rates. The result will be less investment and household spending than there would otherwise be. An attempt by the central bank to negate the risk premium by buying more bonds would allow the government to issue even more bonds, increasing the risk of inflation which would itself put upward pressure on interest rates. Read more: Explainer: what is modern monetary theory?[11] The experience[12] of Latin American countries that relied on their central banks to create money is frightening. Argentina and Venezuela[13] in particular experienced inflation rates of up to 50% and plummeting exchange rates. The idea that, if and when inflation arrives, the Australian government could easily throw its spending and tax engines into reverse is fanciful. It is politically difficult to wind back government spending and raise taxes. To do so on a large scale might be impossible. Modern Monetary theorists respond by pointing out that we have not yet seen inflation in Western countries that have pumped up their money supplies. That’s true, but while the government has been running up debt, we have seen inflation of a sort in big increases in asset prices in housing and stock markets. It has made us more vulnerable to financial shocks and priced many first home buyers out of the market. Markets aren’t forgiving 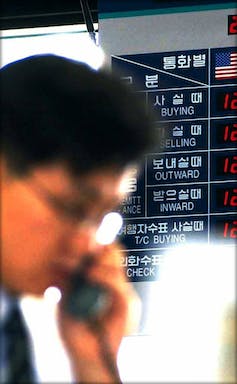 Markets aren’t always forgiving. And what if the foreign exchange market does not buy the modern monetary theory story? Even the expectation of future inflation by the market, before it arrives, could lead to a depreciation of the Australian dollar which could itself create inflation which would make Australians poorer. A final point: the Reserve Bank of Australia is independent[14] from the government. If confidence in this independence was eroded, we could see an increase in perceived risk of holding Australian financial assets. This in turn would cause higher interest rates and a lower Australian dollar. In any case, the Reserve Bank might decide at some point that the risk of inflation or asset price inflation is unacceptable and refuse to buy more government bonds, or sell back to the private sector the bonds it’s bought. Read more: Vital Signs. Do deficits matter any more?[15] This would mean the government debt was owed to the private sector once again. Financial markets might view it as more risky than debt owed to the bank, with negative consequences for interest rates and the exchange rate. I am inclined to agree with the International Monetary Fund’s chief economist who said in relation to modern monetary theory before the COVID crisis that there was “no free lunch[16]”. Martin Wolf of the Financial Times said during the crisis that modern monetary theory was both right and wrong[17]. It was right, because there is no simple budget constraint. It was wrong, because it would prove impossible to manage the economy sensibly once politicians believed there was no simple budget constraint.