“Pestilence is so common,” writes Albert Camus in The Plague:

There have been as many plagues in the world as there have been wars, yet plagues and wars always find people equally unprepared. When war breaks out, people say: ‘It won’t last. It’s too stupid.’ And war is certainly too stupid, but that doesn’t prevent it from lasting.

So, too, with recessions. Too stupid, and so common. Yet they always take people by surprise; and they last.

The damage from the global financial crisis of 2008 lingers[1] in the form of lower economic growth and stagnating wages.

That’s true even in Australia, one of just two developed countries (Korea being the other) that avoided a GFC-driven recession (two successive quarters of declining output).

As I argued in my book title Dog Days: Australia after the boom[2], Australia has long been primed for a recession. Now it is going to get one. Having gained perhaps more than any other developed nation from open borders and trade, it now has more to lose.

Big recessions happen when a shock reveals a weakness in the structure of the economy. There have been manifold points of weakness in the global economy in recent years:

Australia has shared many of the developed countries’ points of vulnerability.

The immediate cause of recession can be any of many things.

It could be the piercing of unwarranted confidence in the sustainability of an exchange rate fixed in Thailand. This is what led to the Asian Financial Crisis of 1997.

Or it could be an excess of financial deregulation promoting lending for houses far in excess of their value. This what led to the US subprime loans crisis a decade late, with the Global Financial Crisis the result.

For any single country, the trigger can be other countries’ recession and the associated reduced demand for imports, or the associated financial stress.

This time it’s a new virus, emerging from the Chinese city of Wuhan in December 2019.

Read more: The big stimulus spending has just begun. Here's how to get it right, quickly[5]

Had the virus outbreak been contained in China, or its immediate neighbours, the effect would still have been enough impose great damage on the Australian economy. The Australian government was determined to do all it could to avoid a recession.

Avoiding recession is an important objective, because the costs are large and hard to unwind. But developments mean there’s no chance of that now.

We can work, however, to ensure the recession is as shallow and short as possible, and that Australians have confidence there is a path to better days ahead.

The importance of knowledge

We don’t know yet how deep the Great Crash of 2020 will dive. That depends a great deal on how governments in many countries respond. Those responses, in turn, depend on the knowledge of leaders, and of citizens, about how the economy works.

Knowledge turns out to be an important part of this story.

Some governments, including Australia’s, have had access to good medical science and have taken it seriously. This has helped to contain the damage.

Some governments have paid little and inconsistent attention to scientific knowledge. The people of the Brazil, Britain and the United States endured pain and expense for their government’s ignorance or stupidity.

Since the Great Depression of the 1930s, we’ve learnt a great deal about how to reduce the depth and length of recessions. We’ve also learned much about the sources of broadly based modern economic growth.

More to gain, more to lose

Australia will have to perform better than most other countries to avoid economic outcomes being worse.

Our economy’s relatively small size and dependence on exporting primary resources means we have more to gain than most other countries from open borders and international trade. We also have more to lose from disruptions. 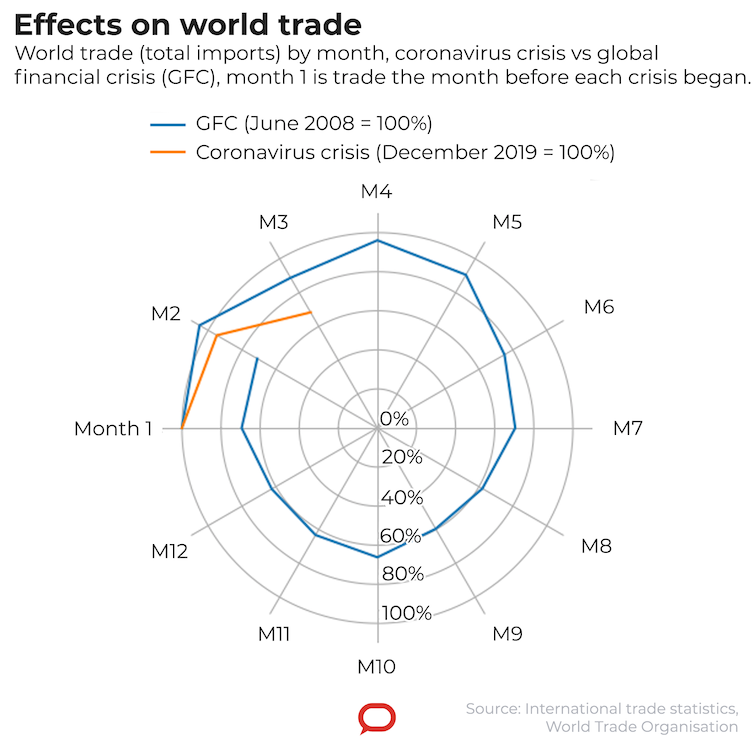 World Trade Organisation, CC BY[7] No other developed economy of comparable size has benefited as much as Australia from the easy international movement of people – for business, pleasure, education, and to build new lives as migrants. Unlike most other developed countries, Australia is also located in a region of developing countries. This means it will be damaged more by the pain the pandemic is likely to disproportionately inflict on the developing world. The challenge facing Australia is unprecedented. It will require solutions to match. Ross Garnaut is presenting a six-part online lecture series about rebuilding Australia’s economy after the pandemic, beginning Wednesday May 20 2020 and continuing for six Wednesdays. For more information go here[8].