The New Zealand government’s recently announced NZ$50 million subsidy package to support local media was necessary[1] and urgent – even if it came too late to save the Bauer magazine titles from closing[2].

But the injection of government cash did not address the underlying cause of the decline of New Zealand’s media, which predates the COVID-19 pandemic.

While the internet has created new opportunities for media and audiences alike, those opportunities have come at a price. Traditional media organisations now compete with giant digital platforms, not only for the attention of readers, but also for the advertising revenue that was once their lifeblood.

Adding insult to injury, the digital platforms compete for audiences’ attention partly by distributing the news content that was first created and published by those now-struggling media organisations.

This not only damages the media and public discourse, it is harmful to taxpayers.

A carefully designed digital service tax (DST) could redress the balance and help level the playing field for the New Zealand media. Such a tax would compensate New Zealand for revenue lost by its failure to tax the profits of non-resident tech giants operating in its territory.

Rules forcing the likes of Google and Facebook to compensate the creators of the media content they carry – as has been introduced in Australia – could also be helpful. Both options could be applied quickly if there was the political will.

The challenge of taxing the tech giants

The New Zealand market for internet advertising services is dominated by two multinationals – Google and Facebook. Unlike the local media, these giants do not pay income tax in New Zealand proportional to their local advertising revenues. 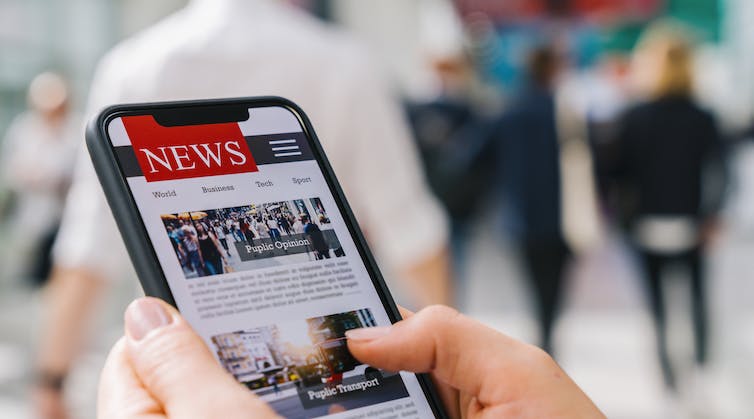 In 2015 Google, Facebook and Amazon accounted for 69% of digital ad revenues outside China. By 2018 their share had risen[4] to 86%. But this growing share of global ad revenue is not matched by the income tax these firms pay in New Zealand.

Due to the complex way the digital giants report their finances, New Zealanders are left guessing how much ad revenue they generate. And yet, just across the Tasman, the Australian Competition and Consumer Commission (ACCC), the equivalent of the NZ Commerce Commission, has forced Google and Facebook to disclose their Australian targeted ad revenue for 2018.

The ACCC estimates[5] Google generated around A$3.7 billion (NZ$3.9 billion) from ads placed on its own search pages and on third parties’ websites. Facebook’s ad revenue was around A$1.7 billion (NZ$1.8 billion).

Based on this data and the similarities between Australia and New Zealand, it is reasonable to conclude that in 2018 Google might have earned about NZ$720 million in New Zealand, and Facebook about NZ$349 million from targeted advertising only.

Changes to reporting standards [made in 2014] mean Facebook isn’t required to file financial statements in New Zealand, so its 2018 tax bill is not public information. In 2018 Google NZ Ltd (an entity of Alphabet group) paid[6] income tax of NZ$398,341 – about 0.055% of the estimated gross ad revenue “extracted” from the New Zealand market.

In Australia Google paid income tax A$26.5 million in 2018 (already a minimal amount[7]), meaning Google New Zealand paid 66.5 times less income tax than its Australian equivalent for the same period. Given the New Zealand economy is about a seventh the size of Australia’s, this is an extremely wide disparity.

New Zealand has been reluctant to unilaterally adopt a DST, possibly to avoid conflict with the US. However, with many OECD members introducing[9] a DST – including France, Italy and the United Kingdom – further delay is difficult to justify. The more countries that put a DST in place the more costly it will become for the US to retaliate.

The New Zealand government has said it prefers[10] “an internationally agreed solution through the OECD” to the tax challenges of digitalisation. The OECD has agreed to find a “solution” by the end of 2020.

With rising tensions between Europe and the US over taxing highly digitalised multinational businesses, that timeframe is looking increasingly unrealistic.

The COVID-19 pandemic has further slowed the process. The delay favours the tech giants but not New Zealand and the other countries where they operate and pay little tax. These countries need to move quickly to stop the erosion of their tax bases.

New Zealand is unlikely to move without Australia on board, but Australia now seems more interested in other mechanisms to correct its relationship with the global tech giants.

The ACCC is developing a mandatory code[11] of competitive conduct that will require Google and Facebook to pay news media for the use of their content. There are similar developments[12] in France.

Such codes target anti-competitive conduct, whereas a DST involves compensation for the loss in revenue caused by outdated international tax rules. To some extent a DST is a charge for the dominant market position of multinational digital services firms.

The ACCC’s code is not a substitute for a digital services tax, but New Zealand could do worse than consider a similar scheme. In the end, both a DST and enforcing payment for content will be necessary if New Zealand wants its local media to survive, let alone thrive - and not just at the expense of taxpayers.