More than 3 million Australians[1] have downloaded the Australian government’s COVIDSafe contact-tracing app in the three days since its release.

But not as impressive as the 2 million downloads[2] in the first 24 hours. The slowing rate suggests it will take longer to get to 4 million, and remember the federal government wants 10 million people, 40% of the population, to download and use the app.

Even with politicians appealing to our better instincts and dangling the carrot of getting back to normal once we reach the golden goal, the evidence from overseas suggests we won’t get there without extra carrots.

Singapore, for example, released its TraceTogether[5] app more than a month ago and still hasn’t cracked 20%. Israel’s Shield[6] app has done no better.

Here is where behavioural economists can help.

Behavioural economists do experiments similar to those in psychology departments, observing participants in controlled experiments[7] to understand the factors that drive their decisions.

Based on these insights, they have been able to propose “nudges[9]” – subtle changes to communications, policies, schemes and systems that more effectively encourage people to behave in ways better for them and society. These avoid the negative consequences of more coercive approaches. 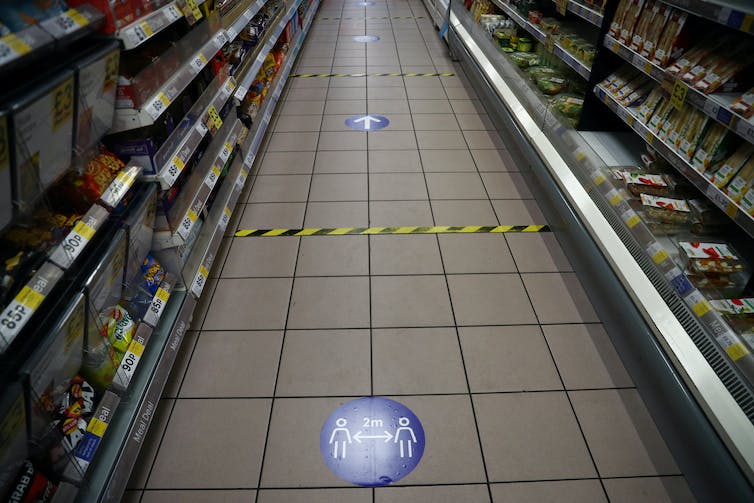 An example is the “opt-out” nudge that has dramatically increased organ donation. Conventional economic theory would say people either want to be a donor or do not. But behavioural research found[10] only 42% of people would “opt in” to be an organ donor while 82% would choose to stay a donor in an “opt-out” scheme. This simple change to donor schemes has saved many lives.

Different nudges informed by behavourial research have been used to encourage recycling[11] and increase cancer-screening rates[12].

So what can behavioural economics tell us about encouraging take-up of the contact-tracing app?

Getting around to it

The first issue is apathy or inertia.

We can see evidence of this in Australia’s download numbers so far. In a poll of 1,011 Australians[13] last week, 45% of respondents said they intended to download the app, while 28% said they would not and 27% said they were unsure.

Assuming those who have downloaded the app so far are from first group, the figures suggest a third of the population is willing to download the app but just hasn’t gotten around to it. This is the first group to “nudge”.

Here the simplest form of nudge – sheer repetition – can be quite effective. Marketing guru Jeffrey Lant coined the “rule of seven’” – that a customer will only buy when they have seen a message seven times. For other types of behaviour it doesn’t necessarily even require that.

A controlled experiment by the Behavioural Economics Team of the Australian government[14] in 2017, for example, found any type of SMS reminder to those with credit-card debt led to a 28% increase[15] in repayments the following month.

So the first lesson is: message repetition.

If everybody else is doing it

Repetition by whom, though?

Certainly the messaging can’t all come from the federal government. It has a trust problem when it comes to matters of digital privacy. Its messaging must be focused on addressing those trust concerns, by strengthening privacy guarantees through legislation[16] and making the app’s code public[17]. 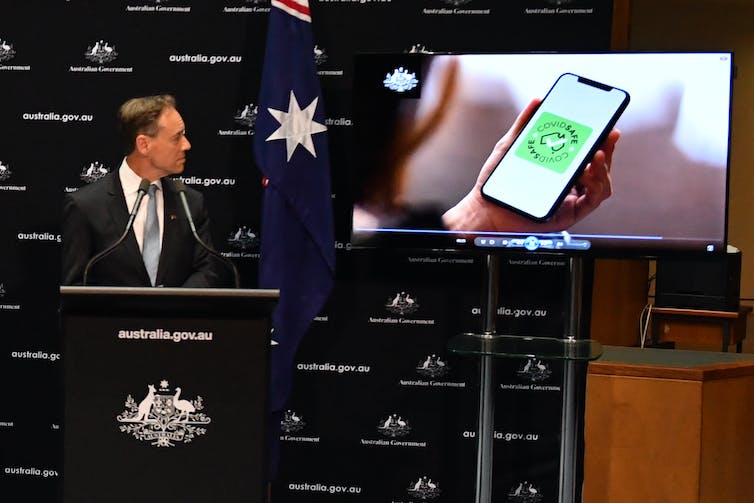 For more general messaging to encourage downloads, behavioural economics offers what is perhaps its most fundamental insight.

Here’s how David Halpern, head of the British government’s Behavioural Insights Team, puts it in his book Inside the Nudge Unit[18]:

The behaviour of other people has a powerful influence on us. It is almost impossible not to follow the gaze of a crowd. We laugh twice as often at a comedy show when we watch it with someone else.

Now that might seem obvious, but behavourial economists have studied the phenomenon in detail. They’ve measured to what extent we care about behaving like other people – 60-70% of the population care a lot[19], according to one study – and the factors that affect our behaviour.

Read more: Coronavirus contact-tracing apps: most of us won’t cooperate unless everyone does[20]

Behavioural studies have found, for instance, that people were eight times more likely[21] to drop a flyer left under their car windscreen if they saw many other flyers on the ground.

It has also measured the powerful nudge of simply informing people about how others act. Such messages have been effective in increasing towel reuse by hotel guests[22] and improving tax compliance[23].

So the second lesson is the importance of communicating a social norm. Such nudges are likely to be valuable for motivating both procrastinators and the undecided.

Well, if you say so

Who those nudges come from is also important.

While we care about being part of the crowd, we also are highly influenced by those we trust.

Why, what and who we trust has been the subject of much behavioural research, because it’s particularly relevant to consumer choices.

In this case, faced with an avalanche of information (and misinformation), we might look for guidance from those we know closely. Or respected members of the community. Or people in particular professions, with doctors, nurses and scientists being the most trusted in Australia[24].

An example of this influence is shown by a tweet from Nobel laureate and immunologist Peter Doherty. His support[25] for the COVIDSafe app was enough to change the mind of at least one person. 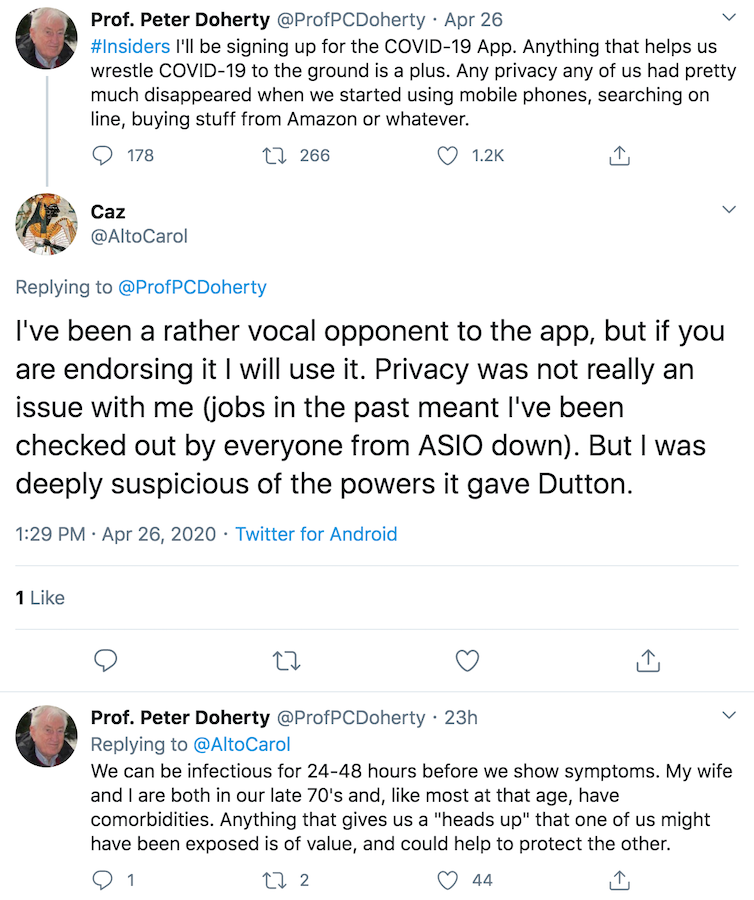 Twitter[26] There will need to be influencers appealing to all demographics – actors, musicians, television personalities, athletes. So the third lesson is the importance of trust. More levers in the toolbox Used smartly, these three insights from behavioural economics on nudges that spur action, communicate social norms and reinforce trust could be highly effective, and cost-effective, in moving the nation closer to the government’s goal. As behavioural economists, though, we suspect getting the whole way will require digging deeper into the nudge toolbox. The levers likely to be needed are the ones economists are most comfortable with: financial incentives or disincentives. Read more: Vital Signs: Modelling tells us the coronavirus app will need a big take-up, economics tells us how to get it[27] Economists Richard Holden and Joshua Gans, for example, have proposed a $10 monthly rebate[28] on phone bills for those who download the app. Behavioural economics can provide important insights into designing effective financial carrots. But that’s another article.