The government says its second stimulus package[1] – the second in ten days – is temporary and targeted, but that’s not really true.

What it is is big, automatic, and infinitely increasable.

The first package, released ten days ago, cost A$17.6 billion. This one costs an extra $66.1 billion. (It’s best not be be too distracted by the claim that the total is $189 billion, almost 10% of GDP – it includes an element of double counting.)

The government has doubled, and then doubled again, what it intends to spend, and has made it easy to spend much, much more.

Automaticity is the key

Josh Frydenberg’s first assignment on being appointed parliamentary secretary to Prime Minister Tony Abbott in 2013 was to cut red tape.

The fewer needless procedures that people and businesses have to comply with (and the fewer forms and multiple forms they need to complete) the better everything can work.

As treasurer, nine months ago he set up a deregulation taskforce[2] staffed by a dedicated unit within treasury.

Its work has infused the government’s second response. 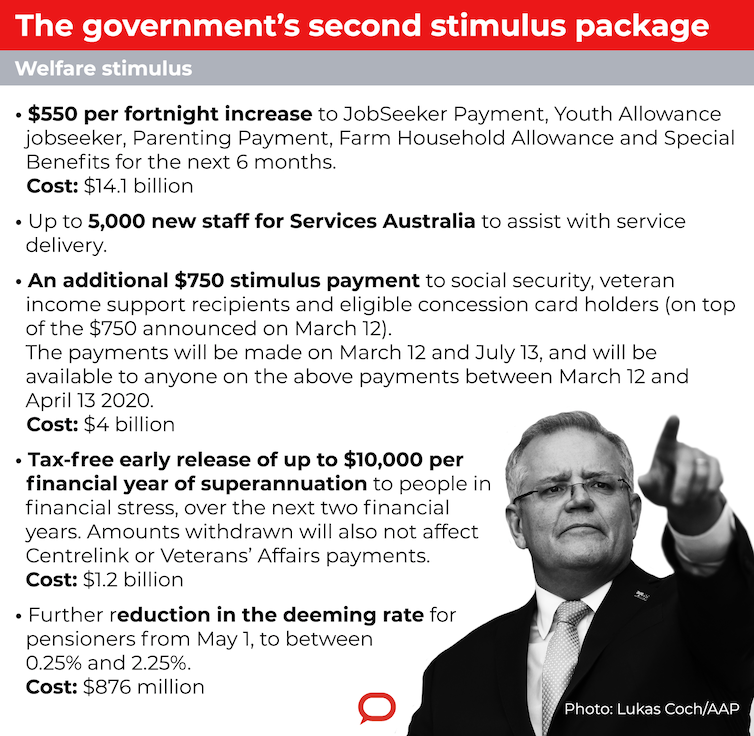 The Conversation An extra $550 per fortnight The government has effectively doubled[3] Newstart (which, in an unrelated previously-announced move, changed its name to “JobSeeker Payment” on Friday). The maximum rate for a single recipient without dependants is $565.70[4] per fortnight. For next six months from April 27[5] for the net six months the government will boost that by $550 per fortnight. Importantly, the extra $550 will go to all recipients, including those who get much less than $565.70 because they have assets or have found a few hours of part-time work. It’ll also go to both existing and new recipients of the Youth Allowance Jobseeker payment, Parenting Payment, Farm Household Allowance and Special Benefit. The asset test for JobSeeker Payment, Youth Allowance Jobseeker and Parenting Payment will be waived for the duration of the boost. Read more: The coronavirus stimulus program is Labor's in disguise, as it should be[6] What really matters is that it will be paid automatically. Recipients will receive the full $550 on top of their regular payment without asking for it. No forms, and an extra 5,000 Services Australia staff (previously called Centrelink staff) to make sure it happens. The government says the boost is temporary, a claim that is not credible. The government can and will extend it for the duration of the crisis, and even after the crisis has ended will find it impossible to fully dismantle. Recipients who have become used to receiving $1,115.70 per fortnight will not take kindly to suggestions they should be busted back to $565.70. A “grandfathering” provision that let existing recipients keep getting $1,115.70 while forcing new recipients on to $565.70 would be almost as unrealistic. Household support Ten days ago the government announced a support payment of $750 to social security, veteran and other income support recipients and eligible concession card holders. It was to be paid automatically[7] from March 31. The new announcement is for an extra[8] $750 to be paid to those people, other than the subset who will be getting the extra $550 per fortnight. About half of them are pensioners. It will be paid “automatically from July 13, 2020”. Early access to super Anyone made redundant because of the coronavirus, or who has their hours cut by 20% or more because of the coronavirus (for sole traders, has their revenue cut by 20% or more) will be able to get early access[9] to up to $10,000 of their super during the current financial year (the one that ends on July 30) and a further $10,000 during the first three months of 2020-21 (July 1 to September 30). Frydenberg believes the funds will find this easy to manage: the super funds last year had about $300 billion in cash, so they have the ability to provide what treasury estimate to be about a $27 billion injection into the economy. He makes the point super belongs to the owners, and was saved with the intention that it be available for use on a rainy day: this is the people’s money, and this is the time they need it most. Withdrawals will be tax-free and will not affect Centrelink or veterans payments. The process will be close to frictionless. Rather than approaching their fund, “eligible individuals will be able to apply online through myGov[10]”. When approved, the fund will “make the payment to you, without you needing to apply to them directly”. Lower deeming rates Pensioners with income-producing assets will find the pension rules adjusted so that they are assumed to earn 0.25% less than had previously been the case, in line with last week’s emergency Reserve Bank rate cut[11]. Again, it will happen automatically[12], from May 1, 2020. 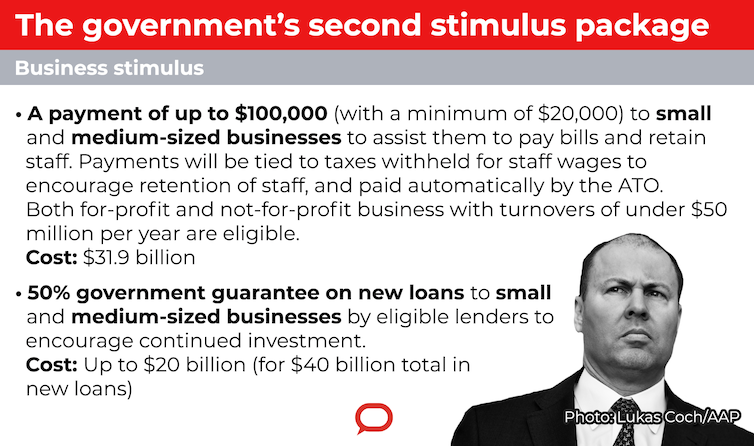 The Conversation Up to $100,000 per business From April 28 employers will receive payments of 100%[13] of the salary and wages they hand over to the tax office (up from 50% in the first package) plus an additional payment calculated using the same formula on July 28. Worth up to $100,000 per business (with a minimum payment of $20,000) it will partially compensate them for hanging on to staff, and the announcement says they won’t need to do a thing. The payments are tax free, there will be no new forms, and payments will flow automatically through the Australian Tax Office. Going guarantor The government will guarantee 50% of any new loans[14] to small and medium sized businesses up to a maximum of $20 billion, which will support $40 billion in loans. This way it’ll be the banks doing the assessments (the government won’t require the paperwork that would be involved in “picking winners”) but it’ll pick up the tab, without the businesses needing to do anything extra. Indefinitely increasable The government has found it relatively simple to plonk this $66.1 billion package on top of the previous $17.6 billion package. It has used the same or pre-existing foundations to scale up amounts and extend time periods. This means it can get money out quickly and for as long as it needs to, in the main putting it into people’s hands automatically. There is no practical constraint on its ability to do so. It has delivered what is almost certainly Australia’s biggest economic stimulus package, and will increase it as needed. It can “find the money” by issuing bonds, effectively IOUs, to investors. If the investors want to offload them, or even if they don’t, the government-owned Reserve Bank has said it will buy them[15] from investors without limit in order to prevent interest rates from rising. The government’s financial measures are scalable without limit. Read more: States are shutting their borders to stop coronavirus. Is that actually allowed?[16]