There are two basic components to the Morrison government’s latest A$1 billion package response to the drought affecting large parts eastern Australia. One part involves extra subsidies to farmers and farm-related business. The other involves measures to create or upgrade infrastructure in rural areas.

Unfortunately, most funds will be misdirected and the response is unlikely to secure the long-term prosperity of regional and rural communities. This is a quick fix to a political problem, appealing to an important constituency. But it misses the point, again, about the emerging economics of drought.

The bulk of the A$1 billion package is allocated to a loan fund. The terms of the ten-year loans are more generous than what has been offered in the past. They are now interest-free for two years, with no requirement to start paying back the principal till the sixth year.

Farmers will be able to borrow up to A$2 million. In addition, loans of up to A$500,000 will also be available to small businesses in drought-affected towns.

Because recipients are not having to pay the full cost, these loans are in practice a form of subsidy. 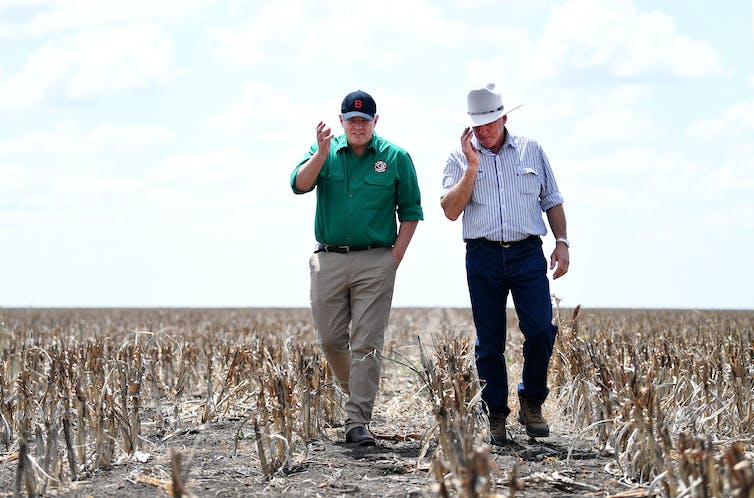 Subsidies are used by government to make more people undertake an activity than would otherwise be the case. In this case the government is offering a subsidy to keep farmers and small businesses owners doing what they’ve been doing, even though from an economic point of view this might not be very wise at all.

The question that should be asked is: “do we want more or fewer people to be involved in a farming activity that is vulnerable to drought?”

Most farming in Australia is completely reliant on rainfed crops and pastures. Rainfall is already highly variable. All the indicators from climate science is that rain will be even more unreliable in the future.

Read more: The science of drought is complex but the message on climate change is clear[2]

In addition, the agricultural industries currently drought affected are not just at the whims of rainfall. These industries are constantly changing and being affected by new technologies and market forces.

For most agricultural produce the key market force is price. Sure, some farms and farmers can carve out niche markets, but most farm businesses depend on producing at lowest cost. Increasingly, the farms that survive in a highly competitive global environment do this by exploiting economies of scale. Big farms are thus more profitable than small ones in the good times (such as when it rains); and during the tough times (such as during drought) they have more resources and deeper reserves to ride it out.

Ultimately, this means successful farms are continually getting bigger and small farmers are getting squeezed out.

The data also support the view that the farmers who survive and are simultaneously exposed to drought ultimately become even more profitable[4], because of what they learnt about managing in a difficult environment.

This is not to argue drought is a good thing for any farm, but it does raise a serious question about any government policy that effectively encourages more people to keep doing something when global and technological forces would point to it being unsustainable.

So what’s the point?

The second component of the Morrison government’s relief response involves directing about A$500 million from existing regional infrastructure funds into building roads and other things into affected communities.

While many will welcome this on top of the the extension of loans to small business in country towns, the policy detracts from the serious questions that confront rural and regional communities.

The economics of agriculture has flow-on effects to towns, but it would be wrong to think all are impacted in the same way.

Read more: Helping farmers in distress doesn't help them be the best: the drought relief dilemma[5]

As a general rule, when farmers sell up, they tend to leave from the small communities first. The upshot is that small communities get smaller, older and poorer as those least mobile are left behind. These people also generally require more, not less, public support. Mid-size communities tend to level out, while continuing to age. Large regional centres tend to grow and prosper.

The point is that each community requires different things from government. Genuine public goods like roads, health services and education are desperately needed and undersupplied in many cases. Providing cash to a few select businesses and grading a gravel road in this situation belies the complexity of the long-term challenges and fails to address serious issues.

An elderly retiree in a rural town might well ask why their local road or bridge is only upgraded during a drought. Surely, government should focus on providing legitimate public goods for the long term, regardless of the weather.