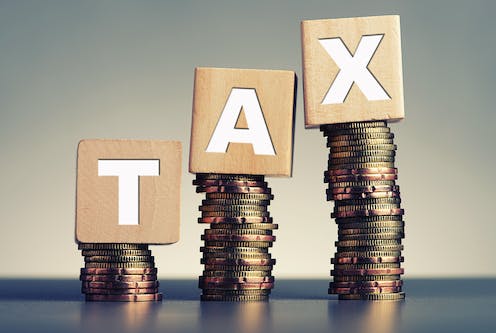 If we asked people in New Zealand what they think the best income tax reform would be, we would expect a range of responses. People will no doubt have different views about which of the four income tax rates and corresponding income thresholds should be lowered or increased.

In our new study[1], we examine how tax rates should be changed to improve social welfare in New Zealand.

At 33%, the current highest marginal income tax rate in New Zealand is relatively low compared to other major advanced economies. For instance, it’s 45% in both the UK and Australia.

We find that, under a range of assumptions, lifting the highest income tax rate and using the proceeds to lower one of the two lowest tax rates achieves the greatest improvement to welfare.

Read more: To tackle inequality, we must start in the labour market[2]

Social welfare is a composite measure of inequality and average income. Tax reforms generally imply a trade-off between the two.

Highly progressive taxes can contribute to reducing income inequality, but this improvement in equity generally comes at a cost as taxes can reduce average incomes and generate “deadweight losses[3]”.

In other words, taxes can reduce the size of the economic pie, for instance by reducing the total amount of hours worked in the economy, and waste resources in the process.

Of course economists, like anyone else, should not impose their own value judgements about how much a society would be willing to “pay” in terms of income loss to reduce income inequality. Instead, we seek to quantify this trade-off under different assumptions about peoples’ preferences. These include levels of “willingness to pay to reduce inequality”, or inequality aversion.

To make the tax reforms comparable, we restrict the analysis to revenue-neutral reforms, meaning that if a tax rate is lowered another one must be increased to offset the lost revenue.

Tax reform package at no cost to government

We assess potential tax reforms using a behavioural microsimulation model[4]. This model is based on a household survey that is representative of the population and incorporates the details of the highly complex income tax and transfer system. The model allows us to quantify the trade-offs of tax reform.

This is how it works. Let’s consider, for instance, an increase in the highest income tax rate from 33% to 34%. Such a tax reform, by reducing take home pay for some workers, would typically lead to a reduction in total hours worked in the economy, and thus in a reduction in average income (and in government revenue).

In the case of the highest tax rate in New Zealand, the model indicates this effect would be small. But tax reforms like this could lead to other responses besides changes in hours worked[5] such as tax evasion and avoidance, which are ignored in our model, even though they may be important in New Zealand.

A first approximation of the welfare loss for households impacted by this reform could be the reduction in net income due to reduced hours of work and higher taxes. But this would clearly be an overestimate because it ignores the corresponding increase in leisure time, which most people value positively.

Our model addresses this issue by putting a monetary value on leisure time, while accounting for the fact that different households value leisure differently. Thus, the increase in the highest tax rate reduces welfare, but by less than the reduction in net income.

Read more: Unions do hurt profits, but not productivity, and they remain a bulwark against a widening wealth gap[6]

Because it mostly affects high-income households, an increase in the highest tax rate typically leads to a reduction in inequality. As there is generally some degree of preference for lower inequality (inequality aversion), this partly offsets the decline in average income.

Obviously, there is no consensus in society as to how much of an improvement in equity is required to offset a given reduction in average income. Our approach is to consider a wide set of views ranging from low to high inequality aversion.

We examine a wide range of tax reforms in a search of revenue-neutral and welfare-improving reform packages.

We find the tax reform that would increase social welfare the most consists of a reduction in one of the two lowest tax rates, funded by an increase in the highest tax rate. Such a reform would lead to more rate progression in the tax system, come at no revenue loss to the government, and increase social welfare. This conclusion applies whether one gives a high or low priority to reduction in inequality.