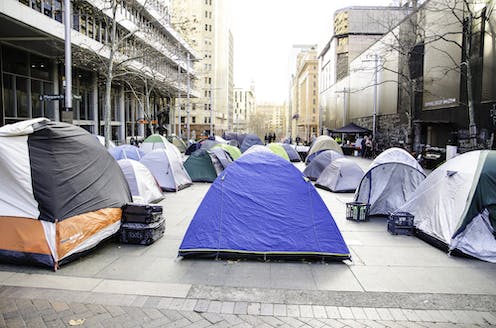 Poverty is often perceived[1] as an ongoing problem for only a very small number of people, and for most households it is a temporary phase that does not last long.

But less than 15% of the most disadvantaged people in Australia exit poverty from one year to the next, according to data from the Journeys Home survey[2], run by the Melbourne Institute.

The view that poverty is largely a transitional experience has influenced the design, implementation and even the evaluation of welfare policy in Australia. If poverty is a temporary phenomenon, then support can take the form of an insurance scheme to supplement income during the limited time spent in poverty.

However, our research suggests that income poverty is persistent for a small group of Australians and is combined with other forms of disadvantage. Supporting these people in finding a pathway out of poverty requires deeper interventions, including targeted health, education and social policies.

Most of the evidence we have on the persistence of poverty is based on long-term surveys designed to be representative of the entire population. Although these surveys offer broad coverage of the population, such surveys are typically limited in their ability to capture the most disadvantaged groups because they constitute only a small part of the general population.

This makes it difficult to produce reliable estimates of the extent of poverty among extremely disadvantaged households.

The Journeys Home survey[4] followed nearly 1,700 welfare recipients from across the country who were identified by Centrelink as homeless or at high risk of experiencing homelessness and housing insecurity.

These are the types of people who have always been particularly difficult to survey, let alone follow through time. As a result, they are likely to be under-represented in general surveys used to study poverty. The Journeys Homes project allows a more precise examination of the prevalence and persistence of poverty among those groups.

We found that significantly fewer people exit poverty every year than the equivalent estimate based on data from the Household, Income and Labour Dynamics in Australia[5] (HILDA). This is a general population survey that has followed a sample of 17,000 Australians since 2001.

Research[6] based on HILDA shows that more than 2 million Australians were below the poverty line in 2015.

Read more: Who's on the outer? Uncovering poverty's many faces[7]

Our study used a poverty line equal to 60% of the median household income, which is a widely used[8] measure in high-income countries. To get an idea, the poverty line in Australia for a single person in 2014 sat at A$517 per week. The threshold for a couple was A$776.

The gap between HILDA and Journeys Home in estimating poverty persists even when we change the level of the poverty line.

Rates of imprisonment and mental illness are also higher in Journeys Home than in HILDA.

The HILDA results show that most Australians who fall below the poverty line do so for a relatively short time, which is good news. However, it is also clear that among chronically disadvantaged people the chances of poverty becoming an enduring feature of life are much higher than previously thought.

If people are trapped below the poverty line for a long time, the sorts of interventions needed to get them out of poverty are likely to be quite different than when the experience of poverty is transitory.

The evidence suggests those who get stuck below the poverty line also have numerous disadvantages, so perhaps we need to rethink interventions designed to assist the most vulnerable members of the community.

A common thread dating back to the 1990s has been to frame long-term reliance on welfare as welfare dependency. Australia’s welfare system might do better if it avoided stigmatising those who get “stuck” and recognised the systemic and structural barriers that make leaving poverty particularly difficult for some households.

For these households, much deeper forms of assistance are needed to help them make a permanent transition out of poverty.