This article is part of an election series on wages, industrial relations, Labor and the union movement ahead of the 2019 federal election. You can read other pieces in the series here[1].

Australia’s prime minister, Scott Morrison, has warned that the head of the trade union movement, Sally McManus, will “be a board member, figuratively” of every single company should he lose the election.

If he’s spooked by a figurative trade unionist, how might he feel about thousands of employee-elected and union-nominated directors serving on every company board?

The Australian Council of Trade Unions passed a motion at its national congress last year urging a future Labor government[2] to “implement a policy of installing employees on company and government managed boards”.

Labor’s own platform[3] says it will examine measures “including worker representation on boards, giving consideration to global models currently in operation and any practical pathways that could lead to their adoption”.

Worker representatives on company boards is also on the agenda in other parts of the English-speaking world.

In the US, Democratic presidential aspirant Elizabeth Warren[4] is pushing the idea for companies with a turnover of more than US$1 billion. In Britain, Conservative leader Theresa May raised the idea during her 2016 campaign to be prime minister[5] and the Labour Party has promised to make all organisations employing more than 250 people give a third of board positions[6] to worker representatives (along with other employee ownership measures[7]).

Read more: How Britain could benefit by bringing workers into the boardroom[8]

It’s an idea that is neither new nor particularly radical. Worker representation on boards has been a feature of Germany’s corporate landscape for decades. The model was once considered so successful that Australia, Britain and the US were all close to doing the same[9] in the 1970s.

Then the idea fell out of fashion. Now it’s back in vogue, in part because of recognition that the current system of governance, in which board directors are appointed to represent shareholders’ interests, is broken[10].

Germany embraced employee-elected and union-nominated[11] representatives on company boards after World War II[12]. The system of “codetermination” initially applied only to the coal and steel sectors but spread to other areas. In 1976 legislation mandated that all companies employing more than 2,000 employees give workers equal representation on their supervisory boards.

Codetermination also gives employees the right to elect representatives to a “works council[13]”, which represents their interests to management on operational issues.

What this means is that, whereas an Australian company generally has an all-powerful board of directors, the typical German corporate governance model involves at least three separate boards. 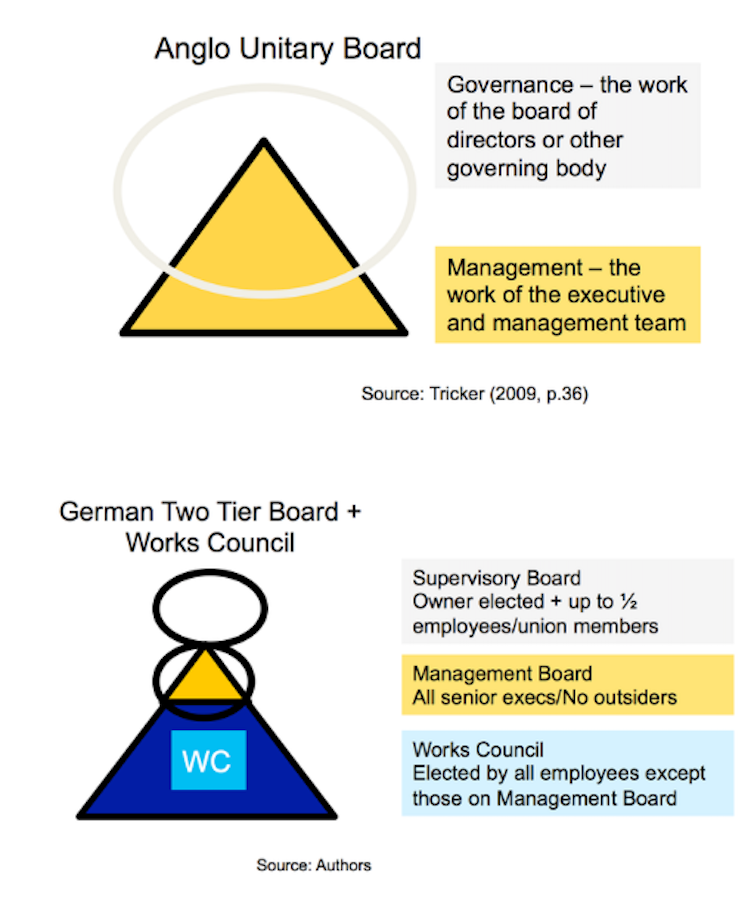 The ‘Anglo’ unitary board model of corporate governance compared with the German codetermination model. The authors, Author provided (No reuse)

There’s a supervisory board, representing both shareholders and workers. A management board, comprising senior management, is accountable to the supervisory board. Then there’s a works council, which oversees the implementation of employment laws and rights and negotiates with management over issues such as hirings and firings.

A model to emulate

Some regarded the embrace of the principles of industrial democracy with codetermination as a big part of the German economic miracle. By the early 1970s European neighbours such as Denmark, Sweden and Norway were adopting the model[14]. The European Union considered making it a common standard.

Australia, Britain and the US were also close to emulating[15] codetermination. But there was fierce pushback by employers and others committed to unfettered capitalism. Two economists associated with the Chicago School of Economics, Michael Jensen and William Meckling, confidently predicted in 1979[16] that codetermination would lead to Germany’s economic collapse.

With the electoral victories of Margaret Thatcher and Ronald Reagan, the opportunity to adopt codetermination passed.

Union movements chose different paths to democratise their economies. In Australia, it was compulsory superannuation[17]. In the US, employee share ownership plans[18]. In Britain, the cooperative sector[19].

Now waves of corporate governance failures, not to mention the fact Germany’s economy has not collapsed, is rehabilitating codetermination.

It is increasingly recognised that our broken corporate governance system[20] – in which companies maximise shareholder profits at the expense of all other stakeholders – has contributed to wider economic underperformance, poor social outcomes and political instability.

The codetermination model offers a number of governance improvements. It requires thinking about a wider set of stakeholders. It increases accountability and oversight. It promotes cooperation.

This is not to say it solves all problems. Corporate governance failures can still occur, as in the case of Siemens[22] and Volkswagen[23].

But research[24] suggests employee directors and work councils do improve governance, and also help positively shape company strategy. Confounding the critics, there is certainly little evidence that promoting internal cooperation has impeded the competitiveness of the Germany economy. The nation is the world’s second-largest exporter of manufactured goods, after China.

That’s why prominent economists such as Thomas Piketty are now saying[25] codetermination is a model worthy of emulation. To be truly effective, though, introducing codetermination in Australia will require rethinking our approach to other areas of worplace relations, such as enterprise bargaining[26] and vocational education and training.