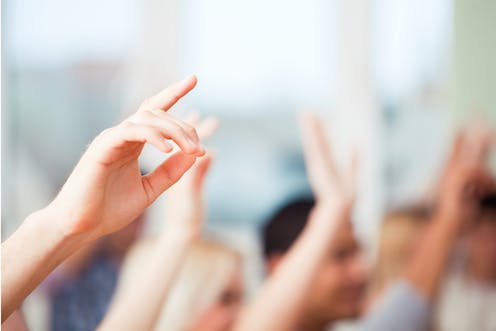 As the federal election approaches, we’re expected to drown in slogans like “lower taxes”, “wage growth”, “franking credit reform” or “negative gearing reforms”. These mostly assume voters are as obsessed as the politicians with economic and financial issues, rather than, say, the kind of Australia they want their grandchildren to live in.

There’s no doubt we value a healthy economy and it can be argued Australia has enjoyed a “remarkable run[1]” over the past 50 years. But Australians also understand and care about the costs of economic growth, and some other issues that our politicians seem less concerned with.

Polling consistently shows[2] citizens care more than their politicians about some quite important issues: action on climate and energy, on housing and inequality, on corporate donations and the corruption of democracy

Read more: The vomit principle, the dead bat, the freeze: how political spin doctors' tactics aim to shape the news[3]

So why doesn’t our political system allow us to discuss and decide on the things we really care about, like the future well-being of our society and even the role of values like kindness, fairness and compassion in directing our policies?

This is the kind of future NZ Jacinda Ardern described to a startled Davos World Economic Forum[4] earlier this year.

This kind of change requires intergenerational policies and a clear vision for the Australia we want; we don’t seem to have either.

They just don’t fit in the three-year election cycle. But the more immediate reason – the elephant in the room – is the widely held view in the political classes and the media that continuous economic growth means the same as societal progress.

Yet ironically, it is our very over-reliance on gross domestic product (GDP) as a singular driver of economic and social policy that has led to many societal problems, such as inequity, over-consumption and climate change.

Internationally, this has led to the UN Sustainable Development Goals[7], the OECD Better Life Index[8] and the Canadian Index of Wellbeing[9]. These allow countries to track their progress towards aspirational goals like “good health and well-being” and “quality education”.

Some countries are going further. They are developing wider models of societal progress where equitable, sustainable well-being is government’s ultimate goal. They are seeking to build this goal into their economies, budgets, political systems and long-term planning, even in some cases their constitution[10]. Many of these models are firmly anchored in a process of citizen engagement and democratic renewal.

Most are members of the Wellbeing Economy Alliance[17], where governments and community groups are combining to construct “an economy that delivers human and ecological wellbeing”.

In July, Ardern will launch the world’s first well-being budget[18]. This will require ministers to demonstrate the well-being impacts of their budget proposals (rather than the impacts on marginal seats, as we do here). Ministers will also need to show the trade-offs between natural, social, human, financial and physical capital.

What should Australian politicians make of this?

All of this should raise a few questions. Do citizens want an alternative model of societal progress to guide our political agenda? What do they consider the most important priorities for the kind of Australia they want? What would an Australian well-being economy look like?

As part of the national ANDI (Australian National Development Index)[19] project, a long term community-research collaboration based at the University of Melbourne, we recently asked some of these questions.

In a national survey of 1,850 people, only 43% of respondents felt Australia was “heading in the right direction”. But nearly 87% thought that in charting our national progress, health, social and environmental measures were as important as economic ones.

When asked about priorities for national progress, people rated highly issues like child and youth well-being, health, education, democracy and governance, communities and infrastructure, fairness, work and work-life, general well-being, environment and sustainability, Indigenous well-being and culture and recreation. Economic life and prosperity were certainly considered important, but at a mid-level in this list.

Encouragingly, a healthy majority (76%) said they would be interested to participate in a national community program to express their views on national progress goals and measures.

Time to have your say

ANDI is planning a large-scale community program to engage Australians around the nation over the next three years, with the aim of producing ongoing “status” reports on progress in 12 key community priority areas each year.

Such a model in Australia could lead to more insightful policy and more mature political debate. It would encourage citizens to think beyond political slogans and tribalism and politicians to plan beyond three-year cycles.

In the longer term, extensive citizen engagement, underpinned with high quality research and evidence, could help to build a shared vision and restore trust and democracy. And perhaps then we could vote on the Australia we want.