Rubina Akbar has given birth to 17 children. That’s high even in her village, where mothers average eight children. But here, in a rural district less than 100 kilometres from India’s national capital of Delhi, the likelihood of dying early remains stubbornly high.

At the time we met Rubina and her husband Maqsood in 2016, they were still mourning the death of their baby son, who had died from diarrhoea, the third-most common cause of death in India of children under five (killing an estimated 300,000 children[3] a year).

Another of their children had died five years before.

India’s economy is the fastest growing in the world, but the gap between haves and have-nots is also growing. Stark inequalities exist in every indicator of development: family size, life expectancy, education, health, access to safe drinking water, basic sanitation and income. 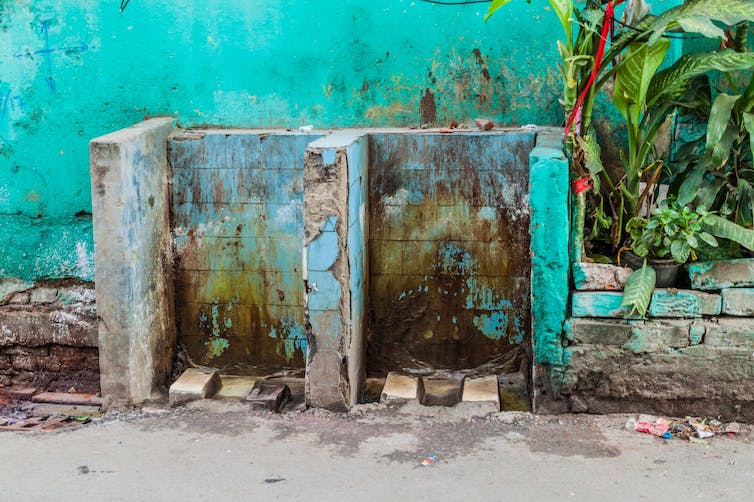 A public toilet in Kolkata. There has been a number of national programs to build infrastructure to reduce open defecation, which is linked to spreading disease. Matyas Rehak/Shutterstock

Five years ago the national government decided to try something new to address these development disparities. It mandated that all enterprises above a certain size, both public or private, must spend 2% of their profits on corporate social responsibility projects.

This was more than just a tax. The idea was that enterprises choosing how the money was spent would promote “out of the box” thinking to address “wicked[4]” social problems.

But the emerging evidence is that this idea is unlikely to be any more successful than many tried in the past. Those charged with implementing the policy resent it. They see it as a way to shift blame for the limited success of government programs designed to reduce inequality.

To find this out, we interviewed managers in charge of corporate social responsibility in 30 of India’s state-owned enterprises, known as Central Public Sector Enterprises (CPSEs).

CPSEs are similar to what Australia calls government business enterprises[6] (such as Australia Post and NBN Co Ltd). Australia has less than a dozen government-owned businesses, whereas India has more than 300[7].

They account for a fifth of India’s GDP[8], and are prevalent in economic sectors considered strategically important, such as mineral and energy resources, and transport infrastructure. Five of India’s ten biggest corporations[9] – Indian Oil, Bharat Petroleum, Hindustan Petroleum, Oil and Natural Gas, and Coal India – are CPSEs.

They were created with the idea of advancing economic development for the social good. Controlling enormous resources, they can be highly profitable. They can also be bureaucratic, inefficient and self-serving compared with private-sector companies operating in more competitive environments.

They are accountable to many masters, including the Parliament of India, Ministry of Corporate Affairs, Department of Public Enterprises, Comptroller and Auditor General of India and the Securities and Exchange Board of India. This means they are susceptible to being run in the interests of internal management rather the major shareholder (the Indian government).

They feared they were being set up to be scapegoats for the failure of programs to reduce inequality in India. Their common view was that government development work had often failed due to rampant inefficiency, instability, corruption and interference.

While one of the stated rationales for the CSR law is to drive innovation, managers expressed to us their frustration that government rules and regulations increasingly dictated how they spent their corporate social responsibility budgets.

An example is the government telling CPSEs to build 2,500 toilet blocks[10] as part of a national program to improve basic sanitation throughout India (known as Swacch Bharat Abhiyan, or “Clean India Mission”) The managers were concerned political interference would force them to fund substandard and less-than-optimum projects. 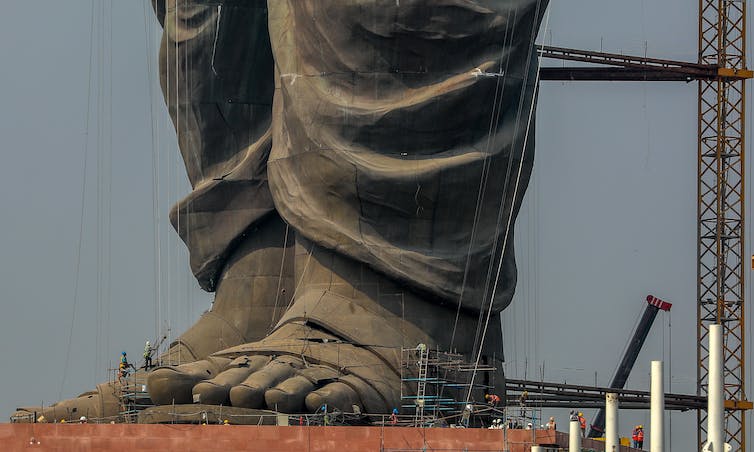 Even less useful is the money CPSEs allocated from their CSR budgets to help pay for India’s Statue of Unity, the world’s tallest statue.

Five corporations (Oil and Natural Gas, Hindustan Petroleum, Bharat Petroleum, Indian Oil, and Oil India) contributed 1.46 billion rupees (about US$21 million) to the statue, a pet project of the ruling BJP party that cost the nation about US$430 million.

An auditor-general’s report to the national parliament said the project failed to meet the CSR law’s definition of an approved activity[11] for protecting national heritage, art and culture.

Read more: India unveils the world's tallest statue, celebrating development at the cost of the environment[12]

Another instance where CPSEs have been accused of using corporate social responsibility expenditure to further the political goals of the government is in funding gaushalas – shelters for cows.

“It seems surprising that companies should see promotion of gaushalas as a concern which would lead to economic and social transformation of society,” says Pushpa Sundar[13], a development specialist and director of the Sampradaan Indian Centre for Philanthropy in Delhi.

“This, at a time when reducing child mortality received no funding and eradicating extreme hunger and poverty received only 6% of the total CSR expenditure.”

These issues raise serious questions about how much the CPSEs can deliver.

At this point the CSR law seems to be another utopian ideal hijacked by political interference.

In even the best of circumstances, forcing business enterprises to take on quasi-government roles and contribute to national development may be the wrong approach.

But in circumstances where the spirit and letter of the law is subverted by political interference, it’s even less likely the CSR law will make a meaningful contribution to national development.