The good news this International Women’s Day is that women are now moving through the ranks into management roles faster than men.

If things continue at this rate it will take just two more decades for women to hold the same number of full-time management positions as men.

For lower-level managers, it could happen even sooner, perhaps in just ten to eleven years.

But for the top spot of chief executive, we are unlikely to see women holding half the positions until 2100[1]. That’s right: until the turn of the 22nd century, 80 years away.

BCEC|WGEA Gender Equity Insights Series 2019: Breaking through the Glass Ceiling[2] The Bankwest Curtin Economics Centre has crunched five years[3] of data collected by the Workplace Gender Equality Agency and discovered that while the glass ceiling that has prevented women from holding high-level jobs is receding, the ceiling governing salaries remains pretty much in place. At every management level, in every industry, the spread of salaries available to male managers is much wider and higher than the spread available to female mangers. The top paid 10% of male mangers earn at least $600K in total salary, whereas the top paid 10% of female managers earn $436K, a difference of over $160K. Which industry has the worst glass ceiling? The real estate industry has the biggest difference, with the pay gap between the top male and female managers reaching nearly 36%. Access to commissions and bonuses is undoubtedly a key driver, as, when base salaries are compared the real estate industry has only the fifth widest gap, behind retailing, health care and social assistance, arts and recreation, and administrative and support services. Retailing has the second widest gap when total remuneration is considered, with a difference of almost 35% between the top earning male and female managers. The next widest are in the finance and insurance industry, the health care and social assistance industry and arts and recreation. So wide are the gaps that they themselves appear to be limiting the number of women in management. Using statistical regression we estimate gender pay gaps within management combine to cut the proportion of women who are full-time managers by an average of 9.9 percentage points and the proportion of women who are part-time managers by 7.9 percentage points. Managerial gender pay gaps by salary and industry, 2018 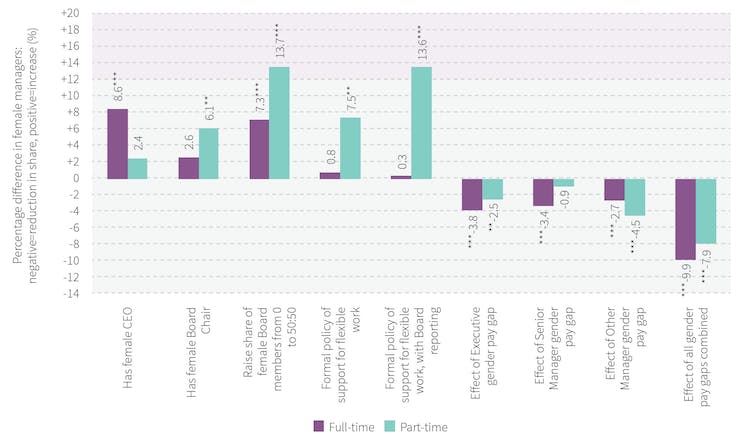 BCEC|WGEA Gender Equity Insights Series 2019: Breaking through the Glass Ceiling[5] Policies that support women to combine work and family life are also critical to seeing women advance. Combining them with accountability is important in making them work. We find flexible workplace policies are twice as effective at increasing the share of part-time managers if they are reinforced with reporting to the board. Workplaces that offer employer-funded paid parental leave schemes covering 13 or more weeks halve the share of managers who resign during paid parental leave compared to those that offer access to only the Australian government scheme. Workplaces that provide on-site childcare stem the loss of female managers during paid-parental leave by almost one fifth. Read more: If we're serious about supporting working families, here are three policies we need to enact now[6] The findings of our report[7], as with the findings of earlier reports in the series[8], show clearly that companies have at their disposal a range of specific actions they could take that would hasten the move toward gender equity in pay and progression. Leadership, female representation on boards and accountability are among them. If companies want to attract and retain the best talent, they must start looking at the return they receive from their investments. But some glass ceilings are proving harder to break than others, particularly when it comes to parity in pay and representation at the highest level. Companies need to show a real commitment to change to make sure we don’t have to wait another 80 years before women are as likely to run companies as men.