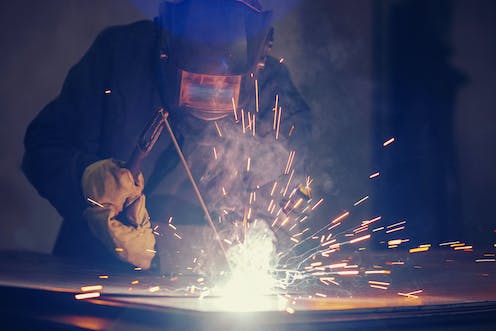 With all the hype around the future of work, you could be forgiven for thinking the biggest issue in the future of employment is the impending takeover of your job by a robot or an algorithm.

Talk about the workplace of the future has become fixated on technological displacement almost to the point of hysteria. There is little doubt that technological development will change the way we work, as it has in the past.

But for most Australians the reality will be much less dramatic. The biggest changes in the working lives of Australians over the past 20 years have arguably not been technological – few of us are sending our avatars to meetings or writing code.

Many of us are, however, lamenting the paradox of feeling overworked yet, at the same time, insecure in our employment. A significant proportion contend with record low wages growth[2]. Others remain less than fully employed[3].

Read more: Our culture of overtime is costing us dearly[4]

Some will say that the rate of insecure or non-permanent work has remained fairly constant over the past two decades. This belies the lived experience of workers. They have repeatedly been found to perceive their connections to the workplace and labour market as precarious[5] and laden with personal risk[6].

Power has been shifting

But there has been more to it than the tweaking of business practices. The relationship between business and the state has been subject to a fundamental realignment.

Since the industrial relations changes in the early 1990s, which moved the setting of wages and conditions away from centralised institutions towards the workplace, the locus of power in the labour market has undergone substantial recalibration.

Collective representation of workers has declined sharply. This is recognised[8] as contributing to the wage stagnation being felt in Australia and other rich nations.

A 2018 article in The Economist[9] acknowledged this, noting that while politicians were scrambling for scapegoats and solutions, addressing stagnant wages required “a better understanding of the relationship between pay, productivity and power”.

A crucial aspect of understanding this relationship is recognising the impact that business consolidation has had. It has not only changed the experience of work, but also altered the balance of power between businesses and workers and between some businesses and other businesses.

Read more: This is what policymakers can and can't do about low wage growth[10]

The ascendance of global monoliths − such as Walmart, Amazon, Apple and Uber (and the big retailers and e-tailers in Australia) – has resulted in organisations that wield enormous economic and cultural power. This has led not only to a reduction in worker power but also to the creation of a crushingly competitive environment for the businesses that have to contend with contract terms dictated by the corporate giants.

What has been the result of the combination of changing business models, reconfigured institutions and the onslaught of business consolidation?

We have seen hyper-competition based on low labour costs, management approaches that skirt worker protection laws, and weaker regulatory oversight.

It has manifested in almost weekly scandals regarding sham contracting, exploitation of workers and what appears to be an epidemic of underpayment in a roll call of some of Australia’s most “successful” companies, among them 7-Eleven[11], Caltex[12] and Domino’s[13]) .

We can shift it back

The policy prescription to remedy the scourge of work insecurity and exploitation is decidedly unsexy. It goes against the zeitgeist that seems to suggest that any change that disrupts an existing system, rule or institution should be hailed as “innovative” and be uncontested.

It requires some reflection and the rebirth of aspects of our industrial relations system that have been lost but have redeeming features.

Key among these old-fashioned remedies is the encouragement of workers and employers to organise and recentralise bargaining.

A stated aim of the federal Conciliation and Arbitration Act 1904[14] was “to facilitate and encourage the organisation of representative bodies of employers and of employees”.

Granted, back then the act was also about keeping industrial peace by preventing lockouts and strikes. This is no longer much of an issue in our era of record low industrial action. But, in the current context of fragmented work, it is unrealistic to expect individual employers and employees to engage in endless rounds of labour-intensive productivity bargaining, with little to show for it.

The economies of scale that were part of a centralised system were lost when workplace-based bargaining system took over. These could be regained, to the advantage of both employees and employers.

Read more: Bargaining the Qantas way: how not to run an industrial dispute[15]

While that policy prescription looks similar to the original Conciliation and Arbitration system, the rationale behind it differs markedly.

A challenge for left and right

Arguments relating to the need for flexibility and regulatory reform, which were the basis of the 1990s decentralisation, were not without merit. Global competition was accelerating and there was a real concern that the Australian economy would not be able to keep pace. So greater agency was given to businesses so they could adjust and lift productivity[16].

But we are now living in very different times. Neither excessive industrial action nor the spectre of poor productivity looms. It is neither intellectually or politically honest to use these as a basis for opposing proposals to recentralising bargaining.

Also, we need to acknowledge that the biggest beneficiaries of the disaggregation introduced in the early 1990s were the biggest businesses.

A more centralised system could allow employers and employees to combine their power to counter competitive pressures from mega-corporations that want to reduce labour standards. They have facilitated toxic workplace practices, including intensive surveillance, unrealistic performance expectations, avoidance of entitlements and exploitation of workers further down supply chains.

Constructing an industrial relations framework that tackles the insecurity that is being experienced now and the further insecurity that may be wrought by technological change is potentially confronting for both sides of the ideological divide.

Elements on the left may be reluctant to acknowledge that not all businesses are the same, that some are being squashed by the structure of the market. Some on the right might not be prepared to concede that the bright idea of the 1990s – reducing union influence and worker voices – has succeeded so well as to create perverse and economically unhelpful outcomes.

Both sides need to lift their gaze above the workplace. They need to recognise that earlier reforms are no longer the right ones now, admit that individual business might not be the best level at which to manage the technological change, and acknowledge where the new power lies, then act accordingly.

Read more: Why are unions so unhappy? An economic explanation of the Change the Rules campaign[17]