Whyalla’s ‘"death notice" has been written a number of times over the past 40 years, beginning with the closure of the shipyards in 1978, continuing with infamous predictions of doom in the leadup to the carbon tax, and most recently, as what was once the BHP steelworks clung to life suffocating in debt and despair under its next owner in 2016.

The revival of the regional city that sits on the western side of South Australia’s Spencer Gulf took a big step forward in July 2017 when British-based industrialist, Sanjeev Gupta, bought the steelworks, and brought hope to the local community of 22,000 people. 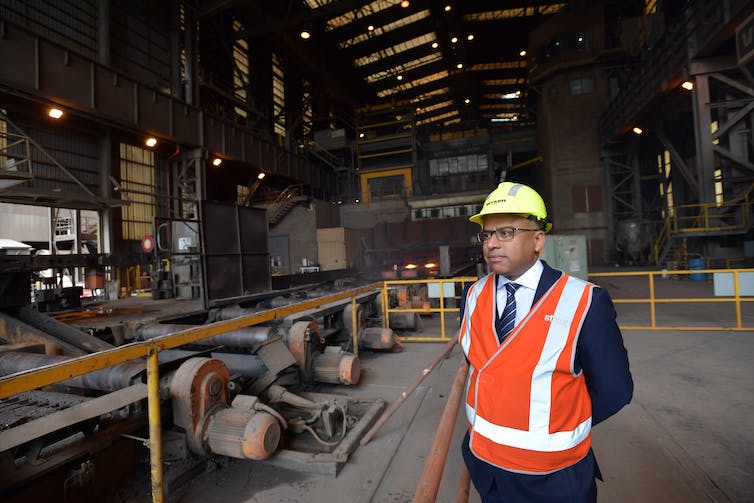 This week that hope turned to optimism when Mr Gupta announced a $600 million upgrade of the existing steelworks, increasing its capacity to 1.8 million tonnes annually.

That announcement, while welcome news to the 2,500 employees, was accompanied by another one, much bigger – a feasibility study of a state-of-the-art plant capable of producing 10 million tonnes of steel for export annually[2].

If it comes off, it’ll triple Australia’s steel output.

Other potential investments announced on Monday that will define the future of Whyalla include:

Whyalla is relatively remote, a long distance away from both the customers for and many of the raw materials needed to create steel.

But it rich in wind, with Australia’s biggest collection of wind farms nearby, and rich in sun, enjoying an impressive 300 days of sunshine a year.

In a location remote from customers and raw materials, Whyalla appears to be an unlikely place to make steel. Datawrapper[3]

Two major renewable energy projects are either underway or are soon to leave the drawing boards near Port Augusta, 75 kilometres north of Whyalla.

The Bungala photo-voltaic solar farm, which recently completed its commissioning, is the largest in the southern hemisphere with a capacity of 220 megawatts[4].

The Aurora concentrated solar thermal project[5] involves a massive array of mirrors that direct the sun’s energy onto a receptor where molten salt retains the energy and can be released on demand.

The super-hot salt is despatched through a heat exchanger where it produces steam which, in turn, generates electricity with a conventional steam turbine. It has a capacity of 150 megawatts but, importantly, it can store 1,100 megawatt hours of energy, thereby overcoming one of the major shortcomings of renewable energy. 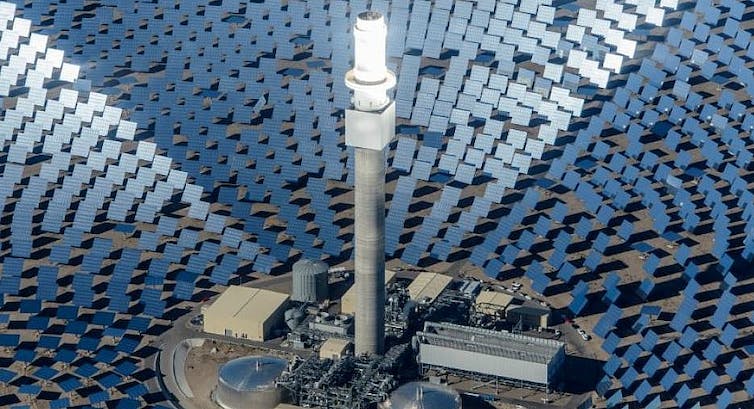 As the SA Centre for Economic Studies has previously reported[7], the availability of cheaper renewable energy will be a competitive advantage for Whyalla and, more generally, the greater Eyre Peninsula region.

This power advantage can be coupled with the region’s other colossal advantage – space. There is abundant land to support low cost, large-scale agricultural and horticultural production, a point implicitly confirmed by Monday’s announcement of a proposed $145 million solar greenhouse.

It’s an outlook that is a far cry from the dark days in 2016 when Arrium, an ofshoot of BHP, went into voluntary administration owing A$4 billion[8].

The subsequent administration of the steelworks by consulting group KordaMentha[9] was a complex affair with negotiations culminating in workers taking a pay cut and the state and federal governments stepping up with assistance packages that proved critical to the immediate viability of the plant and its eventual sale to Sanjeev Gupta’s GFG Alliance[10].

The State Government contributed A$50 million for a future purchaser to make capital improvements at the steelworks, waived royalties on the magnetite ore that the steelworks were reconfigured to consume, provided $5 million dollars to ensure that Arrium’s creditors could survive, and implemented a range of skills development and training programs.

The federal government also chipped in with a A$20 million for regional training and investment, and sourced steel from Whyalla for a major upgrade of the Tarcoola rail line.

In 2016, our centre published Whyalla Economic Development: A Plan for the Future[11] and said the city needed a serious discussion to plan its future because a narrow view focused on shipbuilding in earlier times, and steel-making more recently, had compromised its economic viability.

Part of that planning had to include decisions on such infrastructure improvements as upgrading the electricity transmission system to give it the capacity to carry growing volumes of renewable energy, which is harder to carry than power from conventional generators.

Read more: At its current rate, Australia is on track for 50% renewable electricity in 2025[12]

Investment in human capital is also required and the Centre was encouraged to see the state government act on our 2016 recommendation and commit $100 million towards construction of a new high school in Whyalla, which is scheduled to open in 2022.

The suite of development proposals announced on Monday came with claims that Whyalla’s population could quadruple to 80,000 people as a consequence[13]. An expansion of that size would itself be a major economic stimulus through all the housing, transport and other services required.

Such growth, complemented by effective promotion and marketing that has been missing in the past, could make Whyalla “the gateway” to the greater Eyre Peninsula and the tourism attractions that lie beyond.

KordaMentha’s partner, Mark Mentha, told the ABC’s Australian Story in September that when he arrived as administrator of Arrium, he saw “vulnerability and fear[14]” in the eyes of steelworkers.

If he went back, he would see hope and optimism.