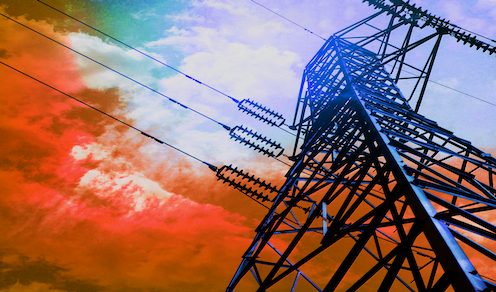 Electricity prices in the short-term (“spot”) wholesale markets in Australia are surging again.

As I first drafted this, at 11.30pm on Tuesday, while electricity demands were not high, the prices quoted for each five-minute interval in Queensland, NSW, Victoria and South Australia were around A$250 per megawatt-hour[1], roughly ten times what they would normally be.

So far this year, average spot prices have been about 50% higher than last year in Victoria, South Australia and Tasmania, about 80% higher in NSW, and 150% higher in Queensland.

If it keeps up (which is likely), retail electricity prices will be on the rise again.

That effect is likely to be big. In NSW and Queensland, it could mean increases as high as 50% for large customers and as high as 20% for households.

Why is it happening? At first glance, it’s hard to say. The minute-by-minute readout comes without explanations.

One reason would be that coal and gas prices are surging. Newcastle “spot” coal is trading at five times[2] its price over the past three years.

Gas and coal prices are spiking

Queensland spot gas costs five times what it did before the invasion of Ukraine.

A second reason might be that electricity producers are making hay while the sun shines by withholding generation capacity.

Steven Percy and I examined the electricity price surges that followed the closure of Victoria’s Hazelwood coal-fired generator in 2017, and found that one firm withheld capacity from the market[3], driving up prices.

Subsequently the government introduced so-called “big stick[4]” legislation that imposes penalties[5] for manipulating prices, although it has yet to be used.

We do not yet know whether manipulation can explain some of what we see now. It will require detailed study, and such analyses are contested.

The price of sunlight is not

The best way to restrain price surges in the medium term is to increase the penetration of low-cost energy from the wind and sun, and to back it with storage.

South Australia shows what can be done. The Rann and Weatherill Labor governments, and then the Marshall Liberal government, have all pushed the switchover to renewables.

By 2021, more than two-thirds of SA’s electricity came from variable renewable generation, more than in any developed economy we know of.

For most days in 2021, there was no need for any other kind of generation between 10am and 5pm.

Read more: Labor says power prices are going up, the Coalition says not. Who's right?[6]

This has had a big impact on prices. From having long had the highest wholesale prices in the National Electricity Market, by 2021 SA had almost the lowest.

Conversely, Queensland, which has long had the least renewable generation, now has the highest prices. In the year to date, Queensland’s average wholesale price[7] has been twice SA’s.

When inputs get cheap, prices fall

The reason, backed by econometric analysis[8] is that when a free resource (wind and sun) displaces an expensive resource (coal and gas), prices fall.

Each state government now accepts this and is rapidly moving to decarbonise its supply, which is leading to a new problem. The states that get there quickly are less keen on sharing their cheaper power than they used to be.

Why would SA want to strengthen its interconnection to NSW, only to have its electricity prices dragged up to those of NSW by trade along that wire?

Read more: 20 years on, the national electricity market is on the way out, and it's OK[9]

The newly elected SA government opposed[10] the interconnector currently under construction while in opposition. From SA’s point of view, the current high prices in NSW lend weight to its position.

We have reached the end of the beginning of the decarbonisation of Australian electricity. With the fossils-vs-renewables argument now over other than on the fringes, the argument has moved to whether the National Electricity Market can hold together[11] and the best way the Commonwealth can help states get as much sunlight, wind and batteries into their systems as soon as possible.