Thirty years after Prime Minister Bob Hawke famously promised that by 1990 no Australian child would live in poverty[1], Bill Shorten has promised that, if elected, Labor will use a “root and branch review” to lift the rate of the Newstart unemployment benefit[2].

They have introduced a private member’s bill[3] that would create an independent commission to examine the adequacy of all social security payments other than family payments and payments to veterans.

It would make recommendations[4], rather than set rates.

The Government opposes it. Labor has opposed such proposals in the past. Prime Minister Scott Morrison has said he would like to increase payments, but they would be ones of his choosing – he would lift the pension before lifting Newstart[5].

But the pension is already much higher than Newstart, and other benefits have fallen behind by more.

Newstart is inadequate and getting worse.

The Organisation for Economic Cooperation and Development raised “concerns about its adequacy[6]” as long ago as 2010.

The relatively low net replacement rate in the first year of the unemployment spell raises issues about its effectiveness in providing sufficient support for those experiencing a job loss, or enabling someone to look for a suitable job.

The main reason why it is inadequate is that it hasn’t increased by much more than inflation since 1994. General living standards have soared during those two and a half decades, as has the pension which is linked to them by being set as proportion of male wages, and which was increased substantially in 2009. 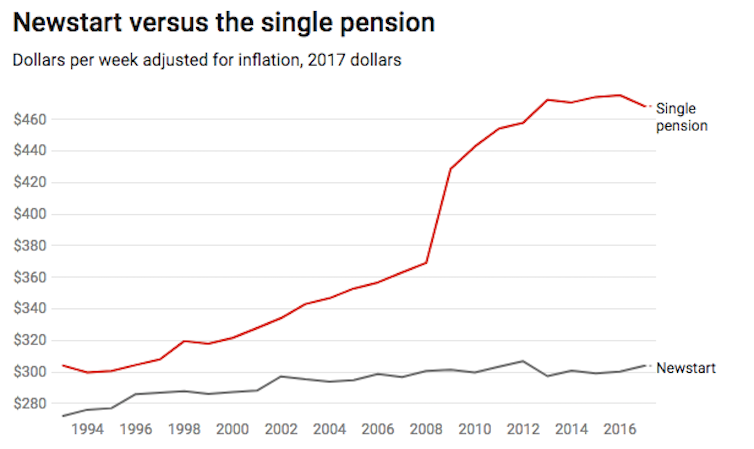