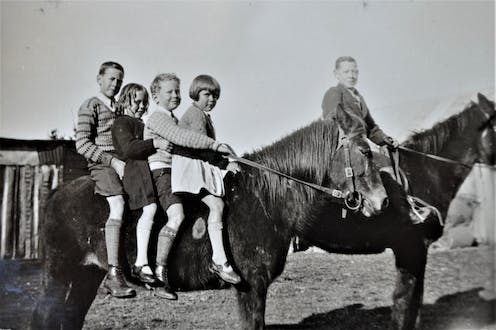 My grandmother, Claire Hastings, was born in the 1920s on a farm in Armidale, northern New South Wales. That was a relatively common thing, with just 43% of the population[1] living in cities, compared with more than 70% now[2].

She lived in a small wooden hut, with a chicken coop out the front and fields out the back. When she and her siblings came home from school, they helped plough the fields with a horse-drawn plough until sundown.

Little did she know this life would soon disappear. The “second industrial revolution” (of mass production and standardisation) was creating machines to replace human and horse power. A plough pulled by a tractor could do in hours what took Grandma and her siblings a week.

By the time she left school, age 17, she wasn’t needed on the farm. So she instead went to college, became a teacher, got married and raised a family. Now 93, she lives in a comfy suburban four-bedroom home, enjoys dining at restaurants, and loves going to the theatre and on ocean cruises.

Her story is far from unique. Around the world industrialisation has reduced farm employment enormously. In the United States, for example, 40% of the labour force worked on farms in 1920; now it is about 2%[3]

The loss of those jobs, and their replacement, is worth remembering as we now confront the “fourth industrial revolution”, with robots and artificial intelligence tipped to take up to 40% of the jobs[4] now done by humans within two decades.

Read more: Behind those headlines. Why not to rely on claims robots threaten half our jobs[5]

The hit list is long[6], from drivers and call-centre workers to computer programmers and university lecturers like myself (we face being replaced by AI avatars, delivering animated content online).

But just as disappearing farm jobs didn’t lead to permanent mass unemployment, nor should we fear this next stage of technological development.

While industrial farming was not universally embraced as progress, the huge reductions in farming labour over the 20th century were key to a better life for most people (though poverty and glaring economic inequality still exist).

To cite just one measure, when my grandmother was born the average life expectancy in Australia was 60 years. Now it’s more than 80[7].

The underlying forces driving such advances are twofold.

First, the mechanisation of farming made food cheaper. US data[8] shows the price of a common basket of groceries is now about 80% cheaper than a century ago. Similar trends exist for virtually every other consumable product.

Second, spending less on food meant people could spend more on other things. New industries sprang up – automobiles, holidays, health care, finance, fitness and education and so on. Sectors virtually unknown in the 1920s now employ more than half of the population[9].

McKinsey These new industries have both underpinned improvements in our quality of life and, crucially, created new jobs. As artificial intelligence and robotics develop, services such as banking, insurance and transport will become cheaper. As a consequence, we will have more money to spend on other items – on health and fitness, travel and leisure and possibilities yet to be conceived. Whatever these new or expanded industries are, jobs will evolve at the same time as quality of life improves for all. Read more: Artificial intelligence can deepen social inequality. Here are 5 ways to help prevent this[10] Two lessons from my grandmother None of this, of course, will necessarily make you feel better if you have (and love) a job under threat from automation. Some lessons from my grandma’s life may help. First, she didn’t take the changes personally. She understood that times were changing, and that she would have to change with them. She embraced the challenge rather than being defeated by it.

The author with his grandmother on her 90th birthday. Bradley Hastings, Author provided Second, she understood she had to develop new skills. At the same time as farm jobs were diminishing, she saw growing demand for more teachers, underpinned by government regulations requiring children to stay in school longer. So too today education is the key for future jobs. None of us know what the future holds. But for our collective future to replicate the advancements my grandmother has seen over her life, it’s inevitable that artificial intelligence and robots will take over jobs. I asked grandma if we should be worried. “Life moves on,” she told me. And so must we. References^ 43% of the population (www.ausstats.abs.gov.au)^ more than 70% now (www.abs.gov.au)^ now it is about 2% (www.mckinsey.com)^ up to 40% of the jobs (fortune.com)^ Behind those headlines. Why not to rely on claims robots threaten half our jobs (theconversation.com)^ hit list is long (www.mckinsey.com)^ more than 80 (www.abs.gov.au)^ US data (www.aei.org)^ half of the population (www.mckinsey.com)^ Artificial intelligence can deepen social inequality. Here are 5 ways to help prevent this (theconversation.com)Authors: Bradley Hastings, Research Fellow, UNSW Sydney