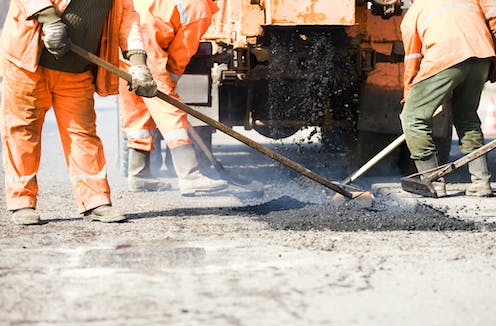 Tomorrow’s minimum wage increase[1] to NZ$21.20 an hour should help a significant number of New Zealand’s lowest paid workers and their families – 300,000 people, according to the government.

Just how much it will help, however, is less certain.

At 6%, the increase is in line with with the 5.9% annual rise in the consumer price index (CPI) in the December 2021 quarter. But inflation is still rising[2], with domestic and global pressures meaning it’s likely to keep rising for some time.

Those minimum wage gains, along with simultaneous increases[3] to other benefits and superannuation payments, are already eroding.

The food price index rose 6.8%[4] in February from the previous year. International commodity[5] and oil[6] prices have soared since the Russian invasion of Ukraine. Some estimates suggest an annual CPI rise of between 7% and 8%[7] in this year’s March quarter.

It’s clear low-income households will continue to struggle to keep pace with the rising cost of living. For that reason, the minimum wage increase must be accompanied by other support measures, and not viewed as a solution in its own right.

In fact, there are those who don’t see a minimum wage as being productive at all. One school of economic thought proposes that minimum wages actually undermine job creation[8] by making employers avoid paying for more expensive labour at the same time as encouraging more workers into the job market.

This view was articulated by Nobel laureate economist George Stigler[9], who wrote in 1976[10]:

One evidence of professional integrity of the economist is the fact that it is not possible to enlist good economists to defend protectionist programs or minimum wage laws.

Read more: Does raising the minimum wage kill jobs? The centurylong search for the elusive answer shows why economics is so difficult – but data sure helps[11]

But other economists have argued against this – for example, David Card[12] and Alan Krueger[13], who published several controversial empirical works in the 1990s finding increasing the minimum wage doesn’t necessarily lead to fewer jobs.

Not everyone agrees with Card and Krueger, however. David Neumark[14] and William Wascher[15] evaluated the evidence and argued minimum wages do reduce employment opportunities[16] for less skilled workers, “especially those who are most directly affected by minimum wage”.

So, there is no real academic consensus on minimum wages – and not even much agreement on what the research literature really says[17].

Given all this, perhaps the better question is whether minimum-wage policies reduce poverty overall. But again, the research has been contradictory.

In one New Zealand study[18] in 2012, researchers found minimum wages do not guarantee people will escape poverty. Another study using Irish data[19] also concluded that minimum wages may be “a blunt instrument” for tackling poverty.

On the other hand, a 2021 US study found significant positive employment effects[21] for single mothers with aged children five and under, suggesting minimum wages at least have potential as a policy instrument for reducing child poverty.

This is particularly relevant in New Zealand for two reasons: one in five[22] Māori children and one in four Pasifika children meet the criteria for material hardship, and Pacific people and Māori represent 10%[23] and 20% of minimum wage earners, respectively.

Examining the effects on various economic outcomes since 2000, the authors argued that minimum wage policies should be “designed and evaluated in the context of other income support policies”.

Those other supports[26] include the Families Package introduced in 2018[27], which included an increase to the accommodation supplement, designed to help low income earners with rent, board or mortgages (but is not available to those in public housing).

Read more: No silver lining for climate change: pain at the petrol pump will do little to get us out of our cars[28]

The same authors recently investigated[29] the impact of increases in the maximum accommodation supplement rates to see if these had simply been swallowed by rising accommodation costs.

Their findings were encouraging[30]: more than 90% of the increase in assistance was captured by the recipients as an increase in after-rent income. A minimum wage policy has a greater chance of success when coupled with successful support policies such as this.

But it’s important such complementary policies are synchronised, especially given only some other social policies, such as Working for Families, are inflation-adjusted[31].

Read more: The pandemic exposes NZ’s supply chain vulnerability – be ready for more inflation in the year ahead[32]

Getting the mix right

Elsewhere, these policy combinations have been effective. In the United States, for example, the Earned Income Tax Credit (EITC) – as its title suggests, a refundable tax credit[33] similar to New Zealand’s Working for Families policy – has been shown to benefit[34] low-wage workers and families in combination with a modest increase in the minimum wage.

Again, the combination of policies works better than either in isolation, and some recent studies[35] suggest EITC expansions and minimum wage hikes should be thought of in tendem as complementary policies.

However, one of the big challenges of integrating minimum wage settings with other policies is that each tool affects many economic outcomes. What should be the optimal level[36] of minimum wages? How do minimum wage hikes interact with other supporting policies?

While there have been some official efforts to measure[37] the relationship between the minimum wage and other state interventions, this needs to go further in order to find the right policy mix – especially during a year that will see continued high inflation, low growth and economic uncertainty.