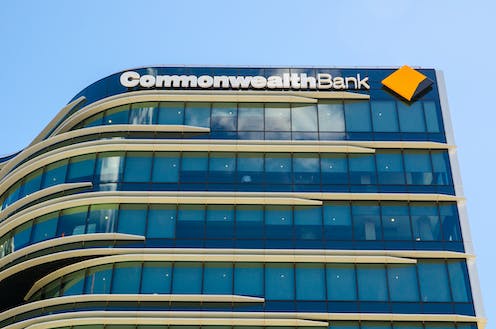 It will be worth watching the final round of hearings[1] at the banking royal commission, which begin on Monday. The chief executives of each of the big four will be recalled for reexaminations.

It might be the final time they appear in the same room. It might even be the last time there’s even such a thing as the big four.

Not only are the so-called four pillars under attack from the Commissioner Kenneth Hayne[2], but there are also enormous economic and technological pressures that are already beginning to undermine their special status[3].

Together, these pressures have the potential to radically change the banking landscape over the coming decades and bring an end to the Four Pillars policy[4] under which Westpac, the Commonwealth, the ANZ and the National Australia Bank have been effectively protected from takeover and prevented from merging.

Although never a formal law, the understanding that none of the big four can merge has been an accepted rule in Australian business since the late 1980s, when the then treasurer Paul Keating made it clear he would block takeovers[6].

Eggs in one basket

Since then the big four banks have changed in two important, but related, ways.

Over the past few years they have retreated from their overseas banking ventures, largely divesting themselves of their sometimes ill-judged[7] foreign acquisitions.

And they have recently sold off[8] most of their local wealth management (insurance and investment) subsidiaries.

These divestments mean we are left with four enormous retail-oriented banks that dominate both the banking system (with almost 80% of banking assets[9]) and the stock market (four of the top six companies on the S&P/ASX 200[10]).

That market is already beginning to contract[11], meaning the big four are going to find it increasingly hard to maintain their stellar profits.

What’s more, the near monopoly they have had on processing payments is under threat.

In Britain around 1,000 bank branches are closing per year in the wake of a technologicial revolution that makes it possible to process payments away from branches and away from banks. The rate of these closures is climbing[12].

Mobile banking means that many basic transactions that used to require a visit to a branch can be done online. Australia’s New Payments Platform[13] means that payments to people such as tradies can be made anywhere, any time, in real time and at minimal cost. Use of the platform isn’t limited to the big four[14].

Read more: The New Payments Platform may mean faster transactions, but it won't be safer[15]

The Reserve Bank reports[16] that after only eight months of operation the number of payments on the platform already exceeds the number of cheques.

Compared with other countries, we have a lot of bank branches.

Australian banks operate[17] more than 5,000 branches, most of them owned by the big four, as well as 30,000 automatic teller machines, and more than 900,000 EFTPOS[18] terminals at supermarkets and Post Offices.

In the United States, just one bank, the Bank of America[19], has 67 million customers.

Inevitably at least one of the big four will come under pressure to fold, be taken over, or merge with one of the others.

The four pillars policy is “aimed at ensuring that whatever other consolidations occur in retail banking, the four major banks will remain separate[21]”.

In 1997, the Wallis Financial Systems Inquiry recommended[22] it be scrapped.

On the other hand, the 2014 Murray Inquiry into financial services recommended[23] that the policy be retained.

But the Murray inquiry, probably due to its narrow terms of reference, found little of the egregious misconduct that has been uncovered by the royal commission. This calls into question the inquiry’s conclusion that there is adequate competition in the banking system.

Indeed, this conclusion was rejected in a recent Productivity Commission report[25], which stated bluntly that “the Four Pillars policy is a redundant convention”.

An end in sight

The end of the four pillars policy needn’t mean the end of competition. Smaller, cheaper competitors will be doing more of what the big four did.

A shakeout of bank branches is long overdue, however painful that may be in many small towns, where despite the serious problems raised at the royal commission, a bank branch is still an important part of the community.

Undoubtedly, such a major disruption, unless managed carefully, will be harrowing for many customers and staff.

Read more: A tip for bankers ahead of the royal commission: be more like doctors[26]

But for the long-term stability of the economy, it is incumbent on governments to address the inevitability of a smaller, more technologically driven banking system – one that hopefully, after the royal commission, will operate ethically for the benefit of customers.