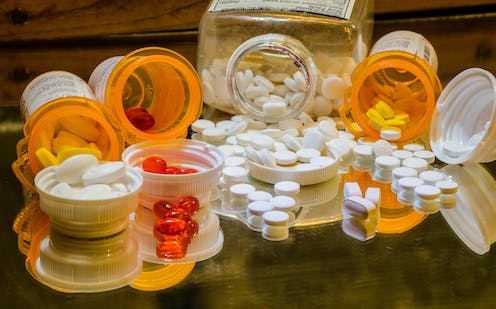 The race by pharmaceutical companies to find effective vaccines for COVID-19 has shone a global spotlight on the trade-offs regulators face in approving new drugs.

Under the system used by drug regulators in the US, Europe and elsewhere, drug companies need only show from clinical trials that new drugs have short-term safety and efficacy in order to gain approval.

So, what happens if something goes wrong longer term?

Specifically, does the market itself punish drug companies when regulators issue warnings about a product’s safety, or withdraw it entirely? Our latest research[1] set out to answer that question.

Warnings after the fact

Companies don’t need to demonstrate a drug’s long-term safety and efficacy. The limited length of clinical trials is allowed in order to keep the cost of developing drugs from being so high that new drugs don’t get developed.

There are also ethical problems with long trials – would you like to spend three years randomly assigned to take a drug you quickly realise is ineffective, or worse?

But our system brings the risk that new drugs can turn out to cause long-term problems undetected at the time of approval – opioid pain killers being a prime example.

Instead, after a drug gets approved, doctors or patients can report “adverse drug events” which regulators can investigate. The regulators may issue a new warning to go on a drug’s label or, in extreme cases, the drug may be withdrawn from the market, as happened with the painkiller Vioxx[2] in 2004.

New safety warnings can vary in seriousness, with examples in our sample ranging from risk of permanent skin discolouration from certain dermal patches[3], up to increased risk of potentially fatal heart[4] or liver damage[5], or suicidal ideation[6].

In the US, the Food and Drug Administration (FDA) therefore further distinguishes between new regular warnings and more serious “boxed” warnings that are urgent enough to be framed and placed at the top of a drug’s information label.

Read more: The price of a drug should be based on its therapeutic benefits – not just what the market will bear[7]

Do regulators get the balance right between encouraging new drug creation and safeguarding public health from unforeseen problems with newly approved drugs?

The burden would not fall on regulators alone if markets tended to “punish” companies whose drugs turn out to cause longer-term problems. This would create additional market incentives for companies to avoid such outcomes.

So do markets help keep us safe when we take approved drugs?

We first tested how total sales volumes of individual drugs across four broad categories in the US and the UK hospital and retail sectors are affected when each country’s respective regulator issues new safety warnings.

Some of these drugs were sold by only one or two companies, while others were sold by many, but we focused on whether warnings significantly affected total sales of individual drugs.

Read more: How pharma can build trust in COVID-19 vaccines: Transparency on trials and side-effects[8]

Beyond asking whether warnings affected total sales volumes of individual drugs, we next tested whether they affected the share price of the individual publicly listed companies selling the drug, in the days surrounding the announcement of the safety warning.

Share prices matter because they should capture whether shareholders in the affected company believe the warning will lower its future profits.

Prescription opioids were hailed as a breakthrough in pain management but created an addiction epidemic. Shutterstock

We followed new warnings, sales and share prices for the US and UK over 12 years, from 2006 to 2017. Across a variety of statistical methods, we found surprisingly little evidence that new safety warnings affect the sales volume of the relevant drugs within our four categories.

The exceptions were in the US (with the UK regulator’s warnings never having a measurable effect on sales in that country). Specifically, if we excluded diabetic drugs, FDA warnings significantly lowered subsequent US sales of the other three drug categories if pooled together, but didn’t significantly lower sales if each broad category of drug was considered separately.

Read more: COVID vaccine trials were a triumph – now we need a similar system for antibiotics[9]

Similarly, having “at least one new boxed warning” during our sample period significantly lowered US hospital sales volume for all four categories of drug combined, but not significantly for each category separately, and not for US retail sales.

At the extreme, we found having at least ten new FDA warnings, or at least three new FDA boxed warnings, significantly lowered total sales volumes in all categories in both US retail and hospitals.

We found even less evidence that warnings affected drug company share prices. The effects of warnings were small, sensitive to our choice of time span around the warning, and statistically insignificant. The single significant exception used a 25-day time span following warnings issued by the UK regulator.

We conclude that if society judges the problems identified by post-approval warnings to be rare or mild, then perhaps there is no reason to think sales volume or company share price should take a hammering.

The current system might then be doing a good job of balancing the cost of new drug development with safeguarding public health against the risk of unforeseen negative side effects.

But if society does judge the problems being identified in new warnings to be too common or serious, then the balance of our evidence is that markets do not punish companies that sell such drugs.

If the market does not fulfil this function, then, it must fall to regulators alone to insist that pre-approval drug trials be run for longer periods for more patients.