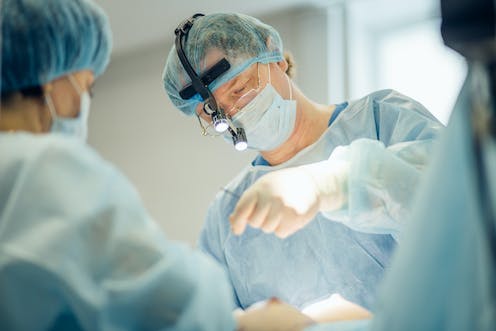 Public and private health expenditure amounted to 10.3% of gross domestic product in 2016-17, almost exactly the same percentage as in 2015-16, according to figures released today by the Australian Institute of Health and Welfare.

That’s because although we spent 5.9% more on health care than the year before, the dollar value of GDP also climbed by 5.9%.

Perhaps you’re not reassured. You might be worried that although overall health expenditure was no more of a burden than previously, more of it was being funded by us rather than the government, in out-of-pocket spending on doctors, pharmaceuticals, and other aids, appliances and services.

Per person, out-of-pocket costs are falling

Does this new good news contradict all those claims that out-of-pocket costs are one of the most important issues in the health sector[2], and “that among wealthy countries we have the third-highest reliance on out-of-pocket payments[3]”?

Not at all. Australia has one of the highest ratios of out-of-pocket recurrent health spending among wealthy countries, although it has fallen slightly from 17.9% to 17.7% since 2011-12.

The data help us focus on where we most need to reduce out-of-pocket expenses.

In contrast, out-of-pocket payments for general practitioners were only A$31 per person, up just 4% since 2011-12.

But averages don’t tell us much. The Institute of Health and Welfare says the typical out-of-pocket cost of out-of-hospital medical services varies from A$80 per person to A$255 per person, according to where you live.

Read more: Many Australians pay too much for health care – here's what the government needs to do[4]

Many of these high out-of-pocket payments are in high-income regions where most people can afford to pay, but not everyone in those regions can pay.

A worrying 7.3% of Australian adults who needed to see a specialist in 2016-17 said they delayed or didn’t go because of the cost.

And especially for dentists

For dental services, out-of-pocket costs reached A$240 per person, per year. Even those with private health insurance still paid 46% of dental fees charged.

Many people without insurance avoided the dentist altogether. Some 27% of the bottom fifth of the population, who are most disadvantaged, delayed or did not see a dentist when they should have in 2016-17 due to the cost.

While medicine gets cheaper

On the plus side, per-person out-of-pocket payments for pharmaceuticals have fallen 15% since 2011-12.

That’s due partly to the reduction in the price that occurs when patents expire.

The table below shows the amount spent out-of-pocket per person per year in 2016-17 for the different types of health services.

Also shown is the percent change in real (inflation adjusted) expenditure per person since 2011-12: