Last week, before the royal commission[1] into its right to hold a casino licence in Victoria, Crown resorted to one of the oldest, most discredited, tricks in the book. It used its workers as shields.

“More than 20,000 people work across Crown’s resorts. Over 11,600 of those work in Melbourne. The vast majority of them were of course not complicit in the misconduct,” its lawyer Michael Borsky told the commission.

Revoking Crown’s licence would sentence Crown’s employees to “enormous disruption and possibly financial hardship” at a time when many were already “living through great uncertainty and hardship”.

And not only Crown’s employees. Among Crown’s shareholders were “tens of thousands of small shareholders and, indeed, superannuation funds”.

Removing Crown’s licence would not only endanger Crown’s workers, it would have “a significant impact on the Victorian tourism industry”. 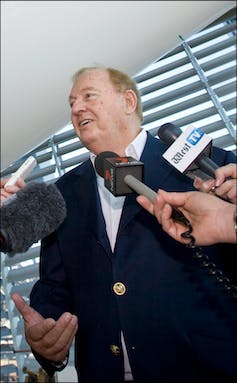 Businessman Alan Bond used the same defence as Crown back in the 1980s. Tony McDonough/AAP

Crown provided 10% of Melbourne’s hotel rooms. Before COVID-19 hit, it contributed A$1.2 billion per year to Victoria’s economy.

It’s a logically flawed defence of the kind I first heard from Alan Bond’s Bond Corporation in the late 1980s, several years before he was imprisoned for fraud.

Trying to fend off an attempt to have his breweries placed in receivership, the company said Bond had 20,000 employees. They might not “have a job to go to on Tuesday”.

The beers made by those breweries — Tooheys, Swan and XXXX — are still being made today.

Clive Palmer tried it as well

The use of this flawed argument reached its peak early last decade during the battle over Labor’s proposed resource super profits tax[2].

Despite its name, the tax was designed as a profit-sharing arrangement[3]. The government would be on the hook for 40% of the cost of each project and would take 40% of the profit.

If a project was profitable for a mining company, then 60% of the project would also be profitable, meaning the tax ought to make no difference to its willingness to invest.

Yet mining magnates such as Clive Palmer and Andrew Forrest threatened to abandon Australia and take their money elsewhere, to Africa or to China.

If Forrest and Palmer had walked away (or even BHP and Rio Tinto, which talked along similar lines), someone else would have walked in. 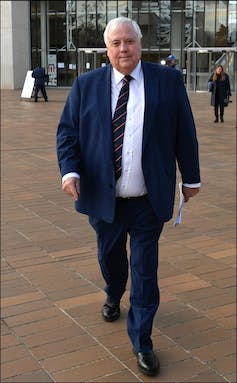 The arrangement might not be to their liking, but it would be to the liking of someone else prepared to take the profit in their place.

Crown, as Royal Commissioner Ray Finkelstein pointed out on August 3, is profitable. Its casino operation is very profitable[5]: “maybe on the decline a little bit, but very profitable”.

“The way industry works is somebody will always step in, so I don’t treat 12,000 employees [as] at risk. ” Finkelstein said.

“They might change their employer, but they are not at risk of losing their jobs.

Nor were suppliers or tourists at risk.

"When we have a profitable operating business, there will be an operator there out in the world, a suitable one.”

A line that used to work — on television

That Crown thought it could spin this line might have something to do with the experience of its largest shareholder, from whom Crown is now distancing itself.

James Packer used to own Channel Nine (as in an earlier era did Alan Bond).

For most of its life, Australia’s television owners have played chicken with the bodies meant to be policing them — the Australian Broadcasting Tribunal and then the Australian Communications and Media Authority.

Each body was given enormous power: the power to suspend or cancel a licence, but with a catch. It lacked lesser powers.

Read more: The TV networks holding back the future[6]

If it suspended or cancelled an operator’s licence, the station would go off the air (at least for a while). The authority would be deluged with complaints.

Packer, Bond and the other owners could use their viewers as human shields.

Time after time (11 times in five years) the authority found Nine had breached the industry code of practice. Time after time it failed to invoke the ultimate sanction.

In a 2005 report for the authority, Professor Ian Ramsay[7] said this meant that in effect it had “less enforcement powers” than other authorities.

Crown’s workers don’t place it beyond the law

Blessedly, in 2006 (as Packer was selling out of Nine) the government acted on Ramsay’s report. The authority can now issue fines[8] and seek enforceable undertakings, without fear of blow-back.

For Finkelstein to accept that if Crown’s licence was revoked its workers or the tourist industry would suffer would be to accept that, like the television industry was for many decades, Crown is beyond the practical reach of the law.

He is giving every indication he thinks no such thing.