Uber has been great for some people and bad for others.

On the other hand, taxi drivers have clearly lost out. Uber has put a serious dent in the value of taxi “plates” and “medallions”. It has also arguably contributed to lower wages for some drivers.

How do we tally up the total social value of Uber? Or, for that matter, any other business or technological innovation? That’s a question raised by a new economics working paper finding that Uber has helped reduce drunk driving.

Anyone who takes rides with Uber knows it is a handy service — so handy that research suggests consumers would be prepared to pay up to 60% more for it.

This was calcluated in 2015 by five US economists in a National Bureau of Economic Research (NBER) working paper[1]. All up that equated to US Uber users valuing the service at US$6.8 billion a year more than what they they spent on it.

Such a valuation is known as the consumer surplus — the extra benefit a consumer gets on top of the price they pay for something.

An introductory economics textbook will tell you the sum of consumer surplus and producer surplus equals the total benefit to society. This can be illustrated using a simplified demand and supply chart (as shown). 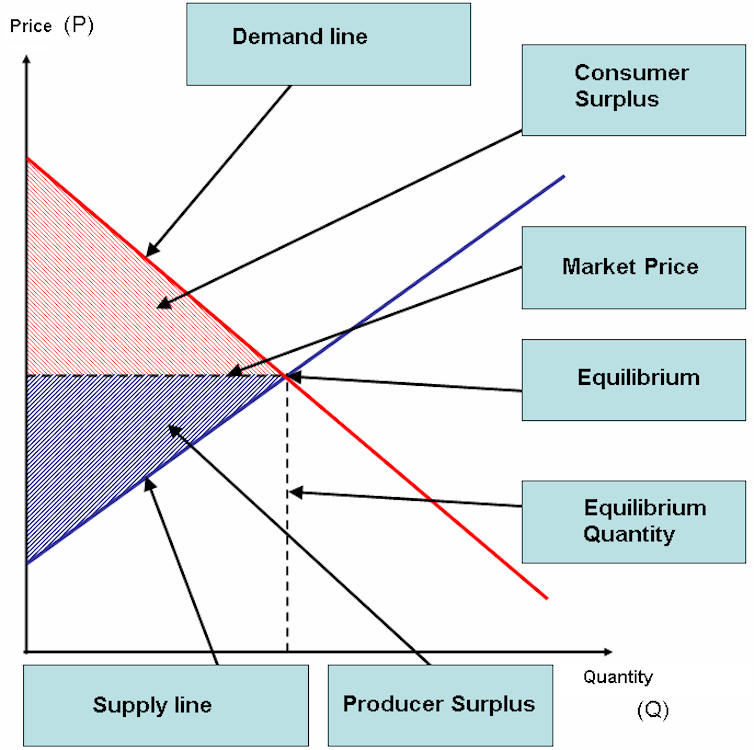 However, the field of welfare economics tells us when this simple arithmetic is not necessarily so.

The first fundamental theorum of welfare economics — known at the First Welfare Theorem — sets out the conditions for Adam Smith’s aphorism that competition and the invisible hand of the market lead to the common good.

A theorem is more than a theory. It is a mathematical truth. The First Welfare Theorem — the most celebrated result in all of economics — was first formally proven in 1951 by Kenneth Arrow[5] and Gerard Debreu[6].

It says the free market can maximise total societal welfare, but only based on a few crucial assumptions. One is that there are no “externalities” — that is, a transaction between a buyer and seller doesn’t affect anyone else.

For example, if I like Diet Coke that probably doesn’t affect you. Why do you care what I drink? I’m only one person so I can’t even affect you by driving up the price of my preferred beverage.

But things aren’t always so simple. What if I have raucous parties and blast loud music into the early hours of the morning? That might be fun for me and my guests, but certainly not for my neighbours.

That’s why “noise pollution” is banned. It’s an externality. It requires regulatory intervention to be corrected. For the same reasons economists advocate a price on carbon emissions, to fix what’s going wrong in the competitive market that allows greenhouse gas pollution.

All of which is to say we can’t always just look at market outcomes, nor simply add up consumer and producer surplus, to understand the social benefit of an innovation or technology.

Which brings us back to Uber.

The paper begins with a plausible hypothesis: that some people before the advent of Uber might have chosen to drive their own car, and then drive home drunk after a big night. In many cases Uber is cheaper and more convenient than the taxis that were an option in such circumstances.

If that’s right, then Uber (and other convenient “rideshare” services) will have reduced the incidence of drunk driving, and the accidents and fatalities resulting. This would be an example of a positive externality — a benefit to third parties (or in this case society).

They convert this into a dollar value using the conventional measure of the so-called “value of statistical life”. This leads to a benefit of US$2.3 billion to US$5.4 billion a year — a significant value on top of Uber’s estimated consumer surplus.

So the winners from Uber are consumers, producers and society.

Markets are great. Except when they’re not. One important reason for “not” is negative externalities like pollution. That’s also why a really important role of government is to use policy tools to internalise such externalities.

In the case of ridesharing, governments need to be attentive to those that lose from its advent. Indeed, in 2016 I proposed a compensation scheme[9] to do just that for taxi plate holders.

Read more: How Uber drivers avoided — and contributed to — the fate of taxi drivers[10]

I’m not sure that’s going to happen with Uber rides. And, of course, without a carbon tax ridesharing still contributes to pollution externalities. So there are pluses and minuses in the “social benefit of Uber” calculus.

But Anderson and Davis compellingly demonstrate that positive externalities can be large and important, all by themselves.