This week the Victorian Royal Commission into Crown Resorts’ Melbourne casino heard from Sonja Bauer, Crown Melbourne’s general manager for responsible gambling. Her evidence revealed a series of deficiencies in the way Crown goes about its “responsible gambling” practices.

These include allowing a patron at the casino to gamble for 34 hours straight[1], and regularly letting people gamble for 12 hours or more[2] before suggesting they take a break.

Commissioner Ray Finkelstein (a former Federal Court judge) wondered how 12 staff could monitor a casino – one of the world’s biggest, with more than 2,600 gaming machines and 540 gaming tables – that attracted an average 64,000 visitors a day.

“I’m just trying to work out how a handful of people can look out for people suffering from gambling problems,” he told Bauer[3]. “It can’t be done. It is physically, humanly impossible.”

The 12 officers are, at least, an improvement from the seven employed up until 2019. That increase was brought about by the Victorian Commission for Gambling and Liquor Regulation’s 2018 review[4] of Crown Melbourne.

The review reported the seven officers spent most of their time dealing with breaches of self-exclusion orders[5] – by which people who recognise they have a gambling problem voluntarily ask gambling venues to keep them out – or queries about revoking self-exclusion. In 2017 and 2018 the officers identified an average of just 112 patrons a week exhibiting signs of potential gambling harm. 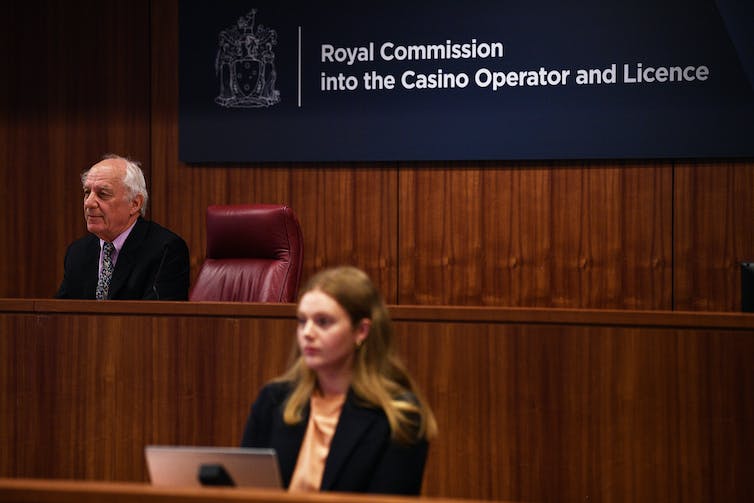 An odd way to minimise harm

The Victorian gambling regulator requires Crown Melbourne to operate with a “responsible gambling code of conduct[6]”. This code states the casino will intervene when people display signs of harmful gambling. It advises that patrons will have access to the “YourPlay” system, to allow them to set limits on time and money spent gambling.

YourPlay has not been an overwhelming success in pubs and clubs, as a 2019 evaluation[7] found. There has been significant uptake at the casino, however. This is because using it in conjunction with Crown’s loyalty program means gamblers can access the casino’s 1,000 unrestricted poker machines. These allow for unlimited bets, and can be operated continuously.

That’s why Crown was giving patrons plastic “picks” to jam the buttons of machines, so they could play without pushing the buttons.

The Victorian gambling regulator banned this practice[8] after it was drawn to the regulator’s attention, but it did not impose a penalty.

Not fit for purpose

These arrangements seems like a strange way to minimise harm. In fact, “responsible gambling” has come under significant criticism[9] in recent years.

Gambling operators adopted the concept[10] to defend themselves against concern over the rising tide of gambling harm. This followed widespread gambling liberalisation in the latter part of the 20th century.

However, it is increasingly seen as not fit for purpose[11]. It is not concerned with preventing harm, and it frequently fails to minimise it.

Read more: Australia has a long way to go on responsible gambling[12]

A review I and colleagues did in 2014 found little if any evidence[13] to support most responsible gambling “interventions”. Although there is evidence to support the idea that gamblers experiencing harm can be identified via observation, there is no evidence that intervening produces benefits.

And, of course, an intervention needs to occur – which the evidence from venue observations[14] and from the royal commission this week suggests is very unlikely.

Crown Melbourne has 25 times more poker machines than the next largest Victorian venue. We know big venues are the most harmful. Crown should, arguably, have the most active harm prevention and minimisation system in the country. It doesn’t. Its approach to harm prevention and minimisation appears as well considered and implemented as its approach to money laundering. 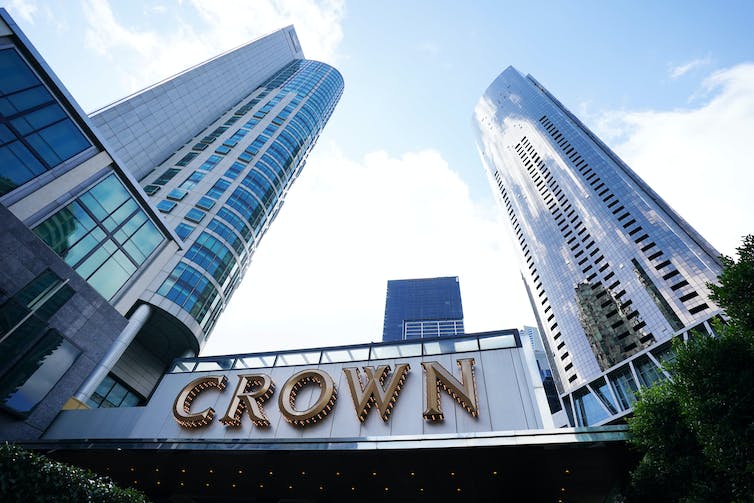 The Crown Melbourne casino is Australia’s biggest casino, and one of the biggest in the world. Michael Dodge/AAP

Read more: Size really does matter: big pokie venues are the most dangerous[15]

Treat this as a public health issue

How can Crown Resorts, along with other gambling venues, stop the appearance, if not the reality, of being harm production factories?

Public health principles can readily be adopted to prevent and reduce gambling harm. Just as with the COVID-19 pandemic, tobacco control and motor vehicle injury reduction – in all of which Australia has been world-leading – public health can prevent gambling harm.

This means the “responsible gambling” mantra has to come to an end.

As colleagues and I argued in a 2019 report[16] prepared for the Victorian Responsible Gambling Foundation, public health can identify multiple “strategies, policies and interventions likely to prevent or minimise harm associated with gambling”.

First among these is a major overhaul of how gambling harm is viewed. Up to this point gambling harm has been seen as synonymous with the concept of the “problem gambler”. This term is stigmatising and effectively blames individuals, which of course suits an industry[17] eager to deflect responsibility.

Legislation should focus on the harms of gambling and how to prevent them. There are myriad effective ways to achieve this, including:

Crown Resorts has been in the spotlight through the Victorian royal commission, the West Australian royal commission[20] into its Perth casino and the NSW Independent Liquor and Gaming Authority’s inquiry into its fitness[21] to operate the Barangaroo casino. But all forms of gambling can impose harms – none more so than poker machines.

Effective regulation can prevent harm. We know what to do. Ditching “responsible gambling”, the emptiest of empty vessels, would be a great start.