Funeral schemes come in various forms but work on the same basic idea. They promise a guaranteed payout upon death to cover funeral expenses.

The idea of a scheme to provide for a funeral is not new. In 18th century Britain a thriving system of “burial clubs” emerged to assist the poor and working classes to save for a funeral. These clubs were spurred by fears of a “pauper’s funeral” and one’s body being stolen and sold for medical experimentation. But with such schemes came financial fraud — and in some cases far worse crimes.

Fears of body snatchers may be a thing of the past, but concerns of “funeral poverty” remain. So does the potential for fraud and exploitation in such schemes.

A notable case study in Australia is Youpla, previously known as the Aboriginal Community Benefit Fund, which the Australian Financial Complaints Authority found[1] to have engaged in false and misleading conduct by marketing itself as an Indigenous self-help fund to vulnerable consumers.

Even when schemes don’t stoop so low, consumer advocacy group Choice has warned[2] the cost of these schemes can often outstrip the benefits.

Rise of the body snatchers

In the 18th century and before, those whose family or friends could not afford to pay for a funeral or burial plot faced the posthumous indignity of a “pauper’s burial”, a low-cost disposal in a shallow, unmarked, mass grave. 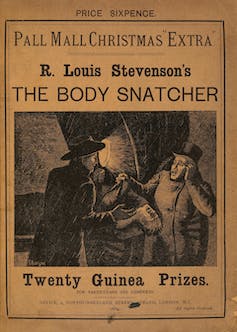 The social imperative to avoid such a shameful burial was amplified by developments in medical science and pressure to relax centuries-old prohibitions against dissecting[5] human subjects.

In 1752 the British parliament passed the Murder Act, allowing anatomists to dissect the bodies of criminals convicted of murder. But demand for bodies far exceeded supply, leading to a thriving black market for dead bodies. Shallow and unguarded pauper graves were obvious targets for “body snatchers”.

This fear of being dug and up and sold for anatomical dissection spurred the creation of clubs to fund a decent burial.

Burial clubs worked on the principle of contributing a small regular sum each week or month, guaranteeing members (or their families) a certain payout upon death.

By the beginning of the 19th century there were about 7,200 registered burial clubs in Britain. They had about 650,000 members, out of a population of about 10.5 million. This suggests about a quarter of all families were covered. 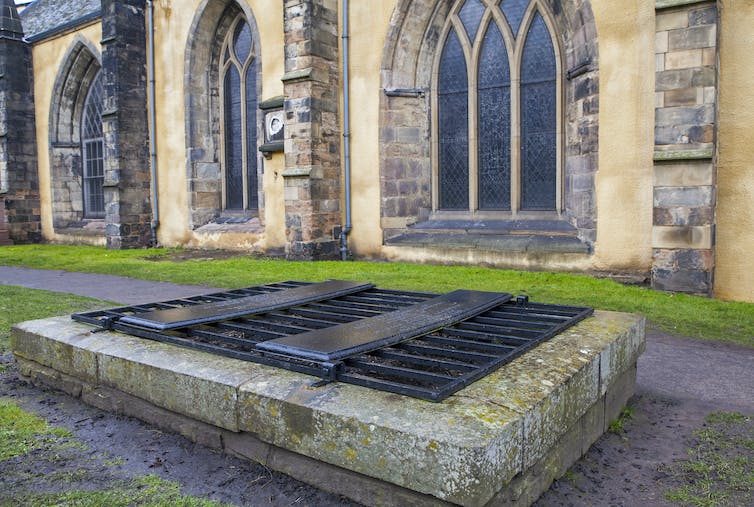 An iron cage known as a ‘mortsafe’ covering a grave in Edinburgh’s Greyfriars Kirkyard. Mortsafes were used in the 19th century to prevent body snatchers from stealing corpses. chrisdorney/Shutterstock

But whenever money is involved, the prospect of financial mismanagement and fraud arises. In 1817, for example, the House of Commons heard evidence about burial clubs meeting in the local public houses and entrusting their subscription money to the publican, who then misspent it.

More alarming were reports of cases where parents registered their infant children in a club — or multiple clubs — then killed them to claim money. In 1848 weekly magazine The Spectator[6] reported that “burial clubs act as a popular incentive to infanticide” and it had become “a more profitable trade to breed sucking children than pigs or poultry”.

As the 19th century progressed, more formal governance regimes were imposed on burial clubs, including a ban against insuring children under six. In addition, the responsibility for caring for the deceased shifted from the family at home to paying an undertaker, and later funeral director.

Read more: What ancient cultures teach us about grief, mourning and continuity of life[7]

With the changes associated with a paid professional intermediary handling most of the activities related to a funeral, funeral insurance schemes have endured.

Modern schemes appeal to those at risk of “funeral poverty”. They work on the same principle of paying a set premium in instalments for a guaranteed payout on death to fund a funeral.

The Australian Securities and Investments Commission reported in 2015[8] on data it obtained from nine of the 12 providers of direct funeral insurance in Australia at the time. Those nine insurers had 437,274 funeral insurance policies covering 743,421 lives. The previous financial year they had taken close to $315 million in premiums, and paid out $103 million.

The report highlighted problems with cost, design, marketing and sales of funeral insurance. In particular, it noted the high rate of policy cancellations; about 35% of those cancellations were initiated by insurers for non-payment of premiums. A higher proportion of Indigenous consumers had policies cancelled, “losing the value of premiums already paid”.

The case of Youpla, previously marketed as the Aboriginal Community Benefit Fund (ACBF), is a particularly egregious example of a funeral scheme preying on vulnerable Indigenous customers.

In 2018 the royal commission[10] into the banking and financial services industry looked at ACBF as a case study of wider issues relating to the marketing of funeral insurance schemes to vulnerable consumers.

Aboriginal and Torres Strait Islander people, especially those living regionally or remotely, may have been particularly likely to be sold funeral insurance policies in circumstances where those policies held little value for them. 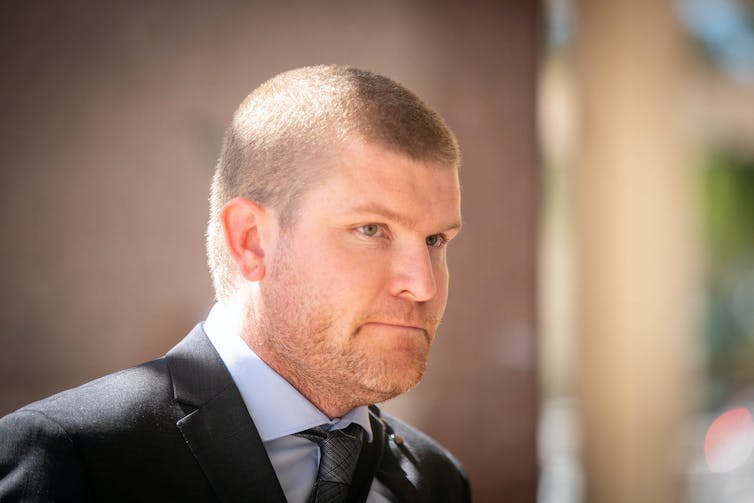 ACBF chief executive Bryn Jones in Darwin in July 2018, where he gave evidence to the Royal Commission into Misconduct in the Banking, Superannuation and Financial Services Industry about his company’s marketing to Aboriginal and Torres Strait Islander people. Glenn Campbell/AAP

In the past nine months the Australian Financial Complaints Authority[12] has ruled in eight cases that ACBF/Youpla engaged in misleading and deceptive conduct, directing the company to refund complainants’ contributions.

In one of those cases, an Indigenous woman signed up to the company believing it was a not-for-profit community organisation offering a form of savings plan for her funeral and those of her four children. She paid the company $7,117 over 11 years, which she lost when ACBF cancelled her policy for non-payment of premiums.

In 1852 Charles Dickens wrote that[13] burial clubs had “cheated and wronged the poor, most cruelly”.

That’s still a risk today, with modern funeral schemes almost exclusively offered by for-profit entities looking to make money. They are not “savings products”. They may not stoop so low as Youpla in their shady marketing tactics but they may still exploit fear of the poor and vulnerable of not being able provide a decent funeral.